Construction of a new Demerara River Bridge is closer to becoming a reality. Minister of State, Joseph Harmon, today, at Post- Cabinet media briefing, at the Ministry of the Presidency said Cabinet has approved a request from the Minister of Public Infrastructure for a new feasibility study after which the new bridge across the Demerara River will be constructed. 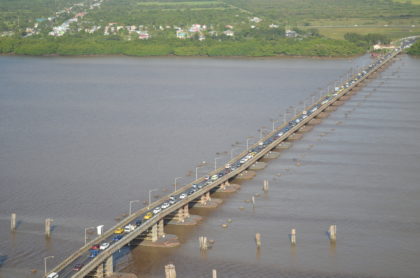 “It may be recalled that a pre-feasibility study was done by the Demerara Harbour Bridge Corporation, in collaboration with the Ministry of Public Infrastructure in 2013. That study concluded that a new high level fixed bridge was the best option to be pursued,” Minister Harmon explained.

The Minister of State noted that in 2016 the Ministry of Public Infrastructure advertised for suitable consultants to conduct the feasibility study that would lead to the construction of the bridge, through a public private partnership model.

The Ministry of Public Infrastructure has since received an offer from LievenseCSO, a Dutch consultancy firm, to conduct the feasibility study and design for the new bridge.

This will include a detailed investigation for prospective financiers, as well as the preparation of a public partnership preparation, Minister Harmon indicated.

The Minister of State further explained that the selection of the Dutch company did go through the necessary steps and was sourced by the National Procurement and Tender Administration Board (NPTAB). “Works will start shortly. We do not have the date when it will be completed, but based on the extent of the work that has to be done we were advised that they will push it so we can have the bridge in a reasonable time,” the Minister said.

The feasibility study is expected to commence in January 2017. The current bridge was built in 1978 and consists of 61 spans of varying lengths and floats on 122 steel pontoons. The structure sees a great volume of traffic on a daily basis and is the main link between Regions Three and Four.