The Hurricane Relief Concert is set to take off with electrifying performances from Trinidadian soca artistes Patrice Roberts, Olatunji and Orlando Octave at the Durban Park, Homestretch Avenue.

The performers arrived this evening at the Eugene F. Correia International Airport with their team, after which they proceeded to the Civil Defense Commission Boardroom for a press conference with the media. 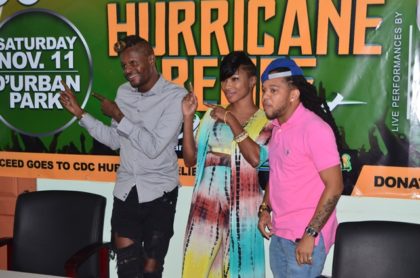 Patrice Roberts, another soca artiste said, “This is no new country for me to perform at; from the moment I got the phone call to come for this worthy cause I took the responsibility to be here to show support. These are countries that I have performed in and I have a lot of fans.”

Being here for the second time, Orlando Octave explained that he is happy to be a part of the “worthy cause.”

“A lot of places have been affected by the hurricane that we as artiste go and make money…and this is a good opportunity to give back to all these countries that supported us for the past few years,” said Octave.

BK Group of Companies Representative, Travis Shepherd reassured that the venue is being prepared and will be set for the performances by the singers on Saturday evening. He noted that gates will be open to persons desirous of attending the show at 18:00hrs; however, the artistes will begin their performances at 20:00hrs.

The concert will also see other local singers performing and the launch of BK Mingles band.

The proceeds from the concert will be distributed among all the islands affected by hurricanes Irma and Maria.