– “I believe putting the smiles on children’s faces is really what we need around this time.” – Hon. Amna Ally

Minister of Social Protection Hon. Amna Ally has been spreading the Christmas cheer and on Monday brought joy to children at Fort Wellington, Region Five.

She provided lunch and donated toys to the young ones at the RDC’s children’s Christmas party where well-known television characters from Baby Shark and PAW Patrol put on a show.

Minister Ally, a Region 5 native, said she was happy to be part of the occasion.

“Well, this is a very pleasant task for me today because I have been going around a number of places in the country and doing this type of activity during the festive season,” she noted. 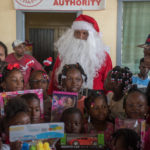 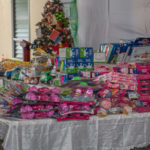 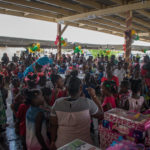 Kids waiting to collect their gifts 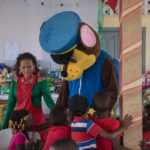 PAW Patrol with some of the kids

The minister said Christmas was a time for fun, cheer and sharing love, and that it meant quite a lot to her.

“I believe putting the smiles on the children’s faces is really what we need around this time,” she said.

Looking ahead, Minister Ally said that the entire Region 5 could expect the ministry to share its Christmas spirit in 2020.

The Christmas party ended with the children taking pictures with their gifts and Santa Claus.