EBD Pedestrian overpasses to be completed by November- all piles installed 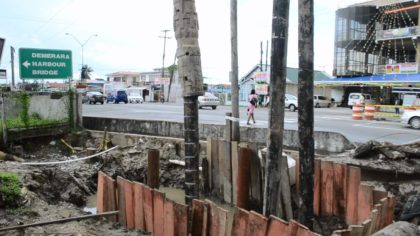 Driven piles at Peter’s Hall near the Demerara Harbour Bridge

“Some of the contractors started doing the foundations… all five will be completed by November this year. When completed, the overpasses will (be accepted) as a normal design. For those who may not be able to walk the stairs to get up to the bypass, the elevator will take them up, and they will go to the other side and get down. I’m excited to have that done and completed,” Minister Patterson explained.

Earlier in the year, Minister of State, Joseph Harmon had announced that a US$364,000 contract was awarded for the pedestrian overpass at Diamond and a US$1M contract for those at Houston, Peter’s Hall and at Eccles.

These efforts are geared at eliminating congestion on the EBD road which is among the busiest in the country.