─ “We do not have the doomsday scenario that some people want to paint” – Min. Jordan

The upbeat half-year report has resulted in a projected 4.5% growth in Guyana’s economy for this year. According to Minister of Finance, Hon. Winston Jordan, this signals five successive years of continuous growth compared to the same period for the PPP/C-led administration. He reminded of the nation’s economic performance from 2015 under the Coalition Government, to the Honourable Bharrat Jagdeo’s tenure.

Presenting the 2019 mid-year report to the media, Minister Jordan explained that this year’s growth rate was revised. The original projection was 4.6% but was adjusted downward to 4.4% following a recent International Monetary Fund (IMF) evaluation.

The report credited the growth to expansions in the following sectors: 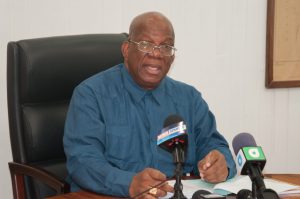 Minister of Finance, Hon. Winston Jordan briefing the media about the Half Year Economic Report 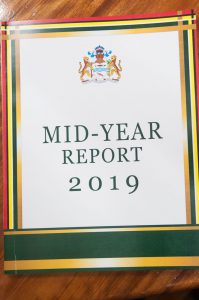 The Half Year Economic Report produced by the Ministry of Finance

Minister Jordan said, “given that the majority of production areas demonstrated strong growth, these collectively, were more than enough to offset the few areas of reduction.”

Going forward, he noted, the oil and non-oil economy will be separated. This will be similar to what was done to the sugar and non-sugar sector to better reflect the inputs in the economy.

The Finance Minister also revealed that the money supply expanded by 9.5% at the end of June 2019.

In the area of the domestic financial markets, a high level of business and consumer confidence is clearly evident, contrary to what some opposition elements have posited about the economy contracting some 35%.

The veteran economist noted: “You have no evidence of this slump. None from the Bank of Guyana (BOG) or anywhere but you hear these figures being trotted out. It will show that net domestic credit has expanded by 14.1% by the end of June, and this has been driven by private sector credit expansion of 5.7%… Lending to households increased by 13.5%, and this was driven by lending to the housing sector, lending for motor cars and other purchases… Real estate mortgages grew by 5.7%. The fastest growth in the last three years and this was driven by lending for private dwellings and industrial and commercial properties.”

Minister Jordan further explained that since 2015, the Coalition Government has been operating in a challenging environment.

“It has been made more difficult in December 2018.”

He also noted the “weather that we have been experiencing well into August, that used to be a dry period in the past, this could affect agriculture and mining.”

“The economy continues to grow. We do not have the doomsday scenario that some people want to paint,” the Finance Minister reminded.