Guyana is receiving European Union (EU) assistance for the full implementation of the global Arms Trade Treaty (ATT) which came into force in 2014.

Minister of Public Security, Hon. Khemraj Ramjattan opened a two-day workshop on Wednesday and noted that Guyana was in a geopolitical space with the highest rate of gun violence in the world. 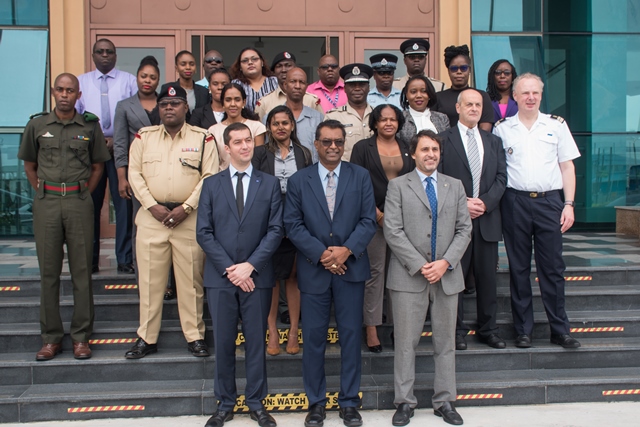 Minister of Public Security Khemraj Ramjattan (centre) with Federico Saurez (right) and Troy Torrington of the European Union Delegation along with the participants of the workshop.

“It is important in that context that we understand the position and location that we are to make sure that these seminars can be of benefit to us to help ultimately that outcome better rates than these very high rates. More work, as it relates to how we deal with the trade of arms and how we prevent unauthorised end-users and that will help to curb that very high rate.”

The ATT is the only binding treaty governing arms transfers worldwide and has provisions to help bring countries like Guyana on par with international best practices.

Minister Ramjattan noted that Guyana was not an exporter but an importer of arms, some of which come illegally from neighbouring Brazil and Venezuela.

“We have heard of situations where some across the border with Venezuela have been selling guns for food,” the minister said.

He continued: “We have to ensure that … we get as much expertise from the European Union and it is important that we utilise these opportunities when we have them coming and wanting to assist so that our system will not be stretched and strained to the extent that it is having now,” the public security minister said.

Public security officials at the workshop are joined by representatives from the ministries of foreign affairs, business, and legal affairs, the army, and the Guyana Revenue Authority.