A large amount of land rates remain outstanding from lessees of the agriculture scheme, the Mahaica Mahaicony Abary/Agricultural Development Authority (MMA/ADA), according to the authority’s General Manager, Aubrey Charles.

The General Manager added that, “Farmers have not been honouring that responsibility. “I would say about 40 – 45 percent of the farmers are not paying. Even if they are paying they are not paying timely, let’s say they are required to pay $60,000 per year they might come and pay $10,000 leaving a big outstanding debt for land rent and drainage and irrigation charges.”

Charles pointed out that the only lands available in phase one of the scheme is “an area of about 15,000 acres of land close to the conservancy, area called Herstelling. It has access, primary drainage and primary irrigation. If a person should get a piece of land there you will have to do secondary drainage, irrigation and access.” 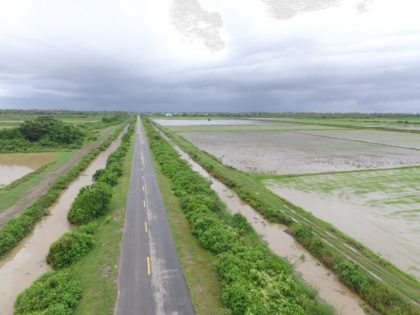 A section of recently sown rice

With regard to developing the available lands, the General Manager said, “to do it the authorities need the funding. Those are big money projects. To develop that 15,000 acres of land and put in drains and so it will cost billions.”

The late or non-payment of land rates is seen as a major bugbear on the ability of the MMA/ADA to develop not only the available 15,000 acres in phase one, but phases two and three. Charles revealed that the current cost of maintaining the scheme is almost $700M.

Minister of Agriculture, Noel Holder described the land rent and the cost of drainage and irrigation as ridiculous. He noted that rentals need to be adjusted upward in line with inflation.

The MMA/ADA was established in 1978 by an Act of Parliament. Its main goals are to manage, operate and maintain all drainage and irrigation works in Region Five, Mahaica/Berbice and to administer all State and Government lands for the benefit of farmers/residents and national development.

The infrastructural works of the scheme were funded by the Inter-American Development Bank.

The MMA/ADA is a semi-autonomous agency under the Ministry of Agriculture,   governed by a Board of Directors. This Board is responsible for the formulation of policies for the efficient functioning and operations of the scheme.

Overall the MMA/ADA supports nearly half of the nation’s rice production, about 30-35 percent of all livestock (mostly cattle) production and 10-15 percent of national sugar production.

Charles credits the success of the agricultural district to the drainage and irrigation works since the establishment of the MMA/ADA. According to him, feasibility studies were carried out prior to the selection of the district and established Region Five as the area with the potential to be one of the country’s leading districts in the production of rice.

Holder further explained that, “to get funding you will have to go to the international agencies, Inter-American Development Bank (IDB) or World Bank or whoever, who will fund you probably 80 percent you will have to find 20 percent. That 20 percent is supposed to be found from the surpluses of phase one, but as you see they are taking money from the treasury instead of putting money in or having a fund to get phases two  and three going, and there is the dilemma.”

Minister Holder also explained that while agencies like MMA should be putting money into the consolidated fund to finance it and other government services, it is now taking money out of government’s coffer at the detriment of other government expenditures such as increased salaries for public servants.

It has been disclosed that contrary to the lease agreement, many lessees are subletting plots leased from the MMA, at rates between 10 times and 15 times higher than that paid to the MMA/ ADA while not paying outstanding debts due. This remains a challenge, which Minister Holder pointed out, “The act doesn’t allow that and the leases they have don’t allow sub-letting.”

“The breaches are straight forward. MMA should come down on them. It’s not a government thing, it’s an MMA thing, they should enforce (the laws), the previous government had a ‘hands off’ approach on those things, but I think this government has to put the law in place and I think that is what we aim to do. I mean what’s legal is legal what’s illegal is illegal when you start bending the laws it leads to chaos. I think that needs to stop.”

While Charles said the ultimate sanction for defaulters is reclamation of the land from lessees, he quickly pointed out that it is not the intention of the current Board of Directors to go in that direction, immediately.

Meanwhile the true potential of the agriculture district remains hindered.