“We will do all that is within our power to ensure that our people are comfortable, and that they are protected from the vagaries of weather,” this was stated by Minister of State Joseph Harmon at a Post Cabinet Press Briefing today. 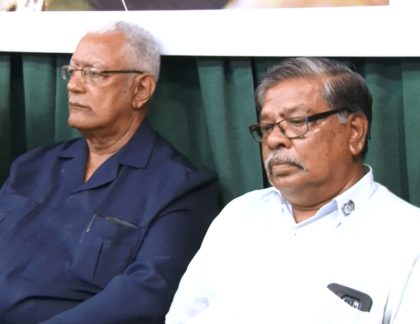 Minister of Agriculture Noel Holder and Director General of the Civil Defense Commission (CDC) Colonel Retired, Chabilall Ramsarup briefed media operatives on what the government will be doing to aid the flood affected areas in Region Six and Region Nine.

Minister Holder explained that due to the overtopping of the Canjie River and heavy rainfall, the Cookrite Savannah has been flooded. Cattle rearing, which is the main economic activity of the Black Bush Polder area has been affected as a result.

The Ministry of Agriculture, Minister Holder noted that, ‘currently a team in the area assessing the situation.” Pumps have been installed in several areas to drain water from the Cookrite Savannah and surrounding areas. This is to control the drainage through the Black Bush Polder cultivated area, because some “cattle farmers will be inclined to break the dams to get relief…” Minister Holder said.

The National Drainage and Irrigation Authority (NDIA) have installed pumps at Lesbeholden, Adventure, at No. 46, No.49, two pumps at No. 52 Village and, “Two machines are cleaning the Fouler Canal to bring water down to No. 66 creek. We think that if there is no excessive rainfall over the next two or three days the water levels should come down,” the Agriculture Minister related. The NDIA has also opened the doors of the Tarine pump; this is to reverse water coming from the Berbice River to the Canjie River.

These measures are to relieve the situation both coastal and riverine, Minister Holder stated.

Director General of CDC, Colonel Ramsarup pointed out that during the 2005 flood, the Abary area faced a similar scenario, he noted that CDC had to build mounds for cattle heads, for the animals to come out of the water, Savannah. They also had to cut and transport grass; however, after a flyover of the area on Tuesday Ramsarup said, “The Cookrite savannah is going be a hard nut to crack.” He hopes that the same can be done for the affected area.

Systems will have to be put in place for a long term plan, to drain the Cookrite Savannah (which has no drainage system to date).

Another region which has been affected by ‘Climate Change’ and constant rainfall is Region Nine. The Tabatinga Creek and the Takatu River have overflowed their banks; the Rio Bronco in Brazil is also filled to capacity and is backing up in the other tributaries, causing flooding in the Upper Takutu-Upper Esequibo Region.

Ramsarup explained that there was a meeting yesterday between the Guyana and Brazilian counterparts, it was discovered that the water in the Rio Branco is rising because of heavy rainfall in North, Brazil. “There has been sunshine in Region Nine nearly for the entire week,” he said, water levels have fallen somewhat in the Lethem area but all the other sub regions are flooded.

The CDC Director General advised farmers to reap all the crops that can be reaped, stock the cassava up” and take their crops to the mill to ensure they make farine, and cassava bread. “I can assure you there is no shortage of food in the area at this point in time,” Ramsarup said.

A CDC team will be visiting Region Nine tomorrow to distribute food supplies, and supplies for animals.