The Automatic Dependent Surveillance-Broadcast (ADS-B) systems installed at the Kaieteur, Port Kaituma, Annai and Kamarang air traffic control towers are expected to be fully operational within the next few months. 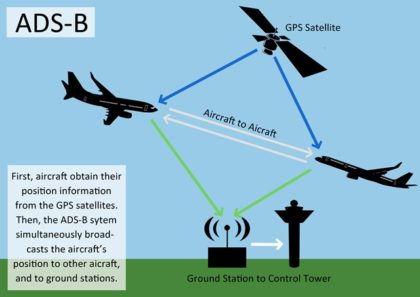 How the ADS-B system works.

“The one item holding us back slightly is securing a static IP address, I’m told by my engineers. So they are actively seeking the assistance of Guyana Telephone Telegraph and I-Net Communications Incorporated to acquire a static IP. This will assist greatly especially for the ones for Annai and Kaieteur areas” Fields indicated.

The installed ADS-B systems are currently being tested and working satisfactorily thus far; when fully operational, they will aid the upload and download of information acquired from aircraft to ground stations. Field explained that the systems will also enable the authority to locate aircraft, especially during crashes.

“Guyana is made of 83,000 square miles and a large part of that is sheer jungle. So, when an aircraft goes down it is difficult to identify its location especially if the Emergency Locator Transmitter beacon doesn’t go off. It’s impossible sometimes to find the aircraft or takes days of searching. So, with the ADS-B, we’ll be able to pinpoint the locations to whichever crash site in a faster time,” the GCAA Director-General underscored.

However, it is mandatory that the aircraft is outfitted with the complementary transponder (a device for receiving a radio signal and automatically transmitting a different signal) for the ADS-B.

An ADS-B system is a surveillance system in which an aircraft determines its position via satellite navigation and periodically broadcasts it, enabling it to be tracked. The systems were installed last year, upon acquisition of the simulator.