The Guyana Industrial Training Centre (GITC) is preparing to celebrate its 5oth anniversary with a series of planned activities leading up to December 14.

The anniversary celebrations were launched on Wednesday under the theme, “Development and Transformation of the 21st century Workforce” at Cara Lodge with guests, technical instructors, students and well-wishers in attendance.

The feature speaker, Technical Advisor to the Minister of Education Vincent Alexander, who is also the Chairman of the GITC board, reflected on the centre’s origination and re-emphasised its purpose and importance to the country. “If you do a real review of our history (Guyana) you will find that as we gather to commence the celebrations, our country has reason to celebrate. One of those reasons is the GITC.” 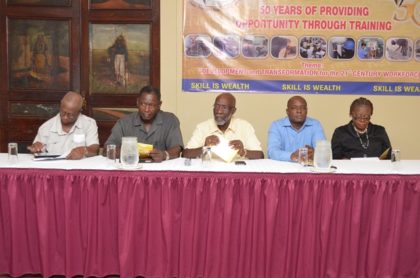 The chairman also pointed out that Guyana’s development should not be measured by its Gross Domestic Product, but by its Human Development Index which would make the GITC more relevant for investments and attention. “We believe that the issue of gross domestic product as a measurement for development was wrong and continues to be wrong. We believe that the human development index ought to be the tool that we ought to use to measure development in any country,” Alexander pointed.

Located in Woolford Avenue, in Georgetown, the centre also caters for full and part-time students who must have at least completed the tenth grade of the secondary programme.

GITC has been a part of the realisation of the nation’s independence after trade unionists decided to establish education institutions, placing emphasis on developing manpower of the local workforce.

GITC sought financial and technical assistance from the American Institute of Free Labour Development (AIFLD) to commence a training programme. The AIFLD then sought help from USAID which provided a grant to construct a training facility for it to be operated for three years. That facility is now the 50-year old GITC.

The training centre was set up to give meaning to education by providing relative skills training for specific occupations. It was also established with the intent of developing the ability to work, work habits, attitudes, and understanding for trainees to have a greater appreciation of the term ‘work’.

Students, teachers and well-wishers of the Guyana Industrial Training Centre at the launch of the centre’s 50th anniversary celebrations.

The current administrator of the GITC, Dexter Cornette expanded on the history of the training centre and highlighted that, “the institution has much to celebrate since they have grown from an experimental institution into a training centre which caters for about 300 persons each year.”

“It is instructive that as we speak of a green economy that the GITC, while facing the challenges, must be prepared to adapt and make its contributions in creating a just society on the principles of a green economy.”

The GTIC’s jubilee anniversary celebrations will continue with a church service at the John Street Church of God in Hadfield Street on August 03, at 14:00 hours, Staff retreat, cultural day presentations, public awareness, and open day among other activities throughout the remainder of the year.