The Guyana Marketing Corporation (GMC) celebrated its 5th anniversary with the launch of an ‘Agro-processors Catalogue’ on Friday.

The catalogue features all of the locally produced items that are sold by the Guyana Marketing Corporation via the Guyana Shop, along with the contact information of the suppliers. 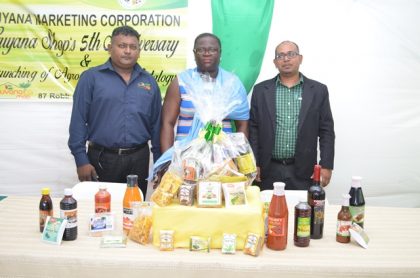 The GMC’s Guyana Shop which was officially launched on October 18, 2012, has been a valuable hub for the marketing of local agro-processed goods. Since its establishment, there have been vast changes in the agro-processing fraternity, reflected in an increase from 43 to 179 new products.

Speaking at the anniversary celebrations, General Manager of the GMC, Ida Sealy-Adams noted that over the years there has been much progress in the quantity and quality of items produced.

“Not just did we increase in the number of agro-processed products but we also had great improvement in terms of product development. Today we have far fewer photocopied labels, we have far fewer recycled bottles we have far more packages that are sealed some of which have secondary packages.”

Interim Chairman of the GMC’s Board Omadatt Chandan expressed the hope that the Agro-processing facility at the Cheddi Jagan International Airport will soon be realised, making it easier for farmers to export goods.

He opined that marketing is vital to the sector. “At the back of our minds is the thought that Guyana is the gateway for larger markets in south and North America as well as the Caribbean. I think marketing is being under-emphasised and I keep saying it all the time. I think marketing can go a long way if we look around the Caribbean at our colleague member states, they might not have the resources like us but they are able to do a lot with the little that they have,” Chandan explained.

He also suggested that the catalogue be made available online.

Meanwhile, Jennifer Spencer, a representative from the Women Agro-Processors Development Network, indicated that the Guyana Shop is a boon to local agro-producers as it serves as a source of additional income for the value-added products they supply.

Customer shopping for locally produced goods at the Guyana Shop. 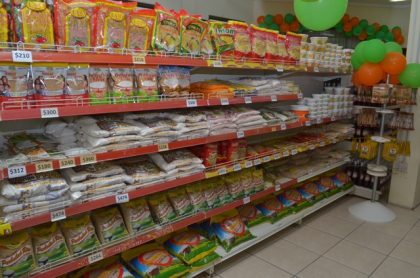 Locally produced items on sale at the Guyana Shop. 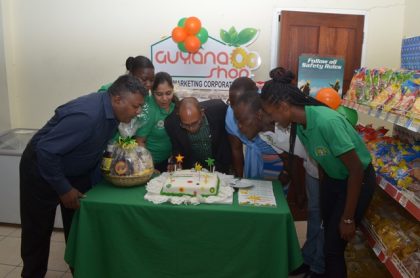 Staff and GMC’s Interim Board Chairman, Omadatt Chandan blowing out candles from the 5th anniversary cake.