The Guyana National Bureau of Standards (GNBS) held a symposium at the National Library today, aimed at sensitising local entrepreneurs on the importance of food safety standards.

The Bureau’s Executive Director, Candelle Walcott-Bostwick noted that the symposium was held to encourage local manufacturers to embrace the implementation of standards.

GNBS’s mission is to improve the quality of goods and services in Guyana, through standardisation. 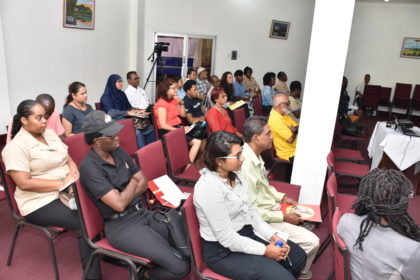 The criteria for salted fish and dried fish are that; it will not cause food borne infections or toxicities when properly handled and prepared, does not contain salt residues in excess of established limit, is free of disease and obvious contamination and has been produced under hygienic control.

She also touched on requirements which consumers should expect when purchasing these items, which include expiration date, quality, and price.

Walcott-Bostwick is calling on all entrepreneurs to embrace the standards and to help reduce cost due to waste.