Minister of State, Joseph Harmon has assured that the government will be ready for the State Assets Recovery Bill 2017, when it comes up for debate in the National Assembly.

The Bill was on the Order Paper for debate at yesterday’s Sitting of the National Assembly.  It was the third Bill on the order paper following Prime Minister Hamilton Green’s Pension Bill 2017 and the Civil Aviation Bill 2017. 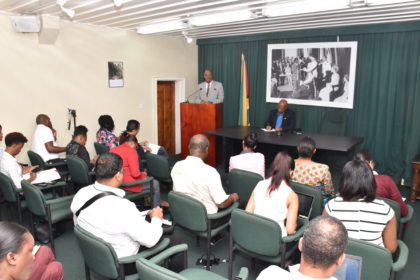 Minister of State, Joseph Harmon addressing the post-Cabinet press briefing at the Ministry of the Presidency

The presentations on the prior two Bills went well into the evening, and a decision was taken to postpone the second reading of the State Assets Recovery Bill 2017 to a later date. “It was felt that, that particular Bill because of the interest, which it has generated, would basically take up almost an entire session of the National Assembly,” Minister Harmon explained at the post-Cabinet press briefing at the Ministry of the Presidency, today.

The State Assets Recovery Bill 2017 is intended to give effect to the non-conviction based asset recovery recommendations contained in the United Nations Convention Against Corruption 2003, which was ratified by the Government of Guyana in April 2008.

The Bill therefore introduces legislation to combat unlawful conduct and corrupt practices in relation to property and other assets owned by the State, or in which the State has an interest.

In this context, the Bill provides for the establishment of the State Assets Recovery Agency (SARA) which has as its primary function, the civil recovery of State property obtained through the unlawful conduct of a public official or other persons, or any benefit obtained in connection with that unlawful conduct, by way of civil proceedings taken in the High Court for a civil recovery order.

The granting of a civil recovery order vests in the State, ownership of any property subject to the order.

SARA will have a Director with responsibility for the effective management and execution of its functions.