The Ministry of Natural Resources will examine the possibility of establishing a community sawmill for the logging communities of Kwakwani and Ituni as a means of promoting value-added production.

During a recent two-day outreach to the logging communities, the request for assistance in this area was raised with Minister of Natural Resources Raphael Trotman.

In Kwakwani, some residents called for a review of taxes on timber products since they claimed it was “an extra burden to the forestry sector.” It was pointed out by other residents that the promotion of value-added production, such as sawmilling, was one way to reduce taxes.

“I think, and I believe and most persons will agree with me, that we need to start doing some more value-added to our forestry products,” Joslyn Morian told Minister Trotman during a public meeting at the Kwakwani Primary School.

Minister Trotman said the suggestion will be examined. “The idea of maybe a community sawmill is not a bad one. It is something government will explore as an incentive because we are taxing you at 14 percent, we should be giving back something to compensate for that,” Minister Trotman said.

A similar request was made by members of the Ituni Logging Association for infrastructure or equipment to promote value-added production. One member also requested assistance in boosting trade of such products. “It would impact the community so much that persons wouldn’t be underselling their produce to outside buyers,” the resident said.

The Ministry of Natural Resources has been reviewing policies in the forestry sector with the aim of promoting value-added production of lumber. 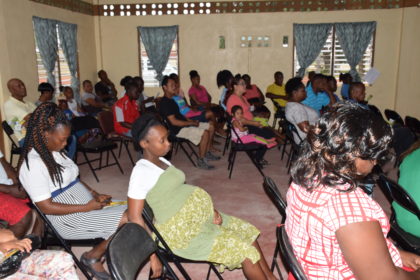 Meeting with Ituni residents at the Ituni Loggers’ Association building 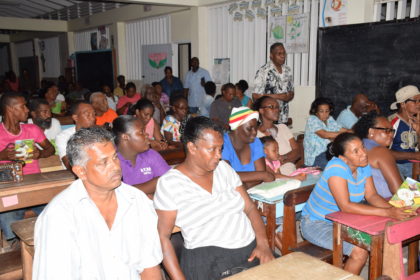 The public meeting in Kwakwani, Region 10