The government will be investing more heavily in youths. Currently, only a small percentage of the National Budget is allocated for youth development. This figure will be increased significantly, according to Minister of Public Security, Khemraj Ramjattan. The Minister made this disclosure at the eighth ‘Turkeyen and Tain Talks on youth, crime and violence’at the Pegasus Hotel, Kingston on Wednesday. 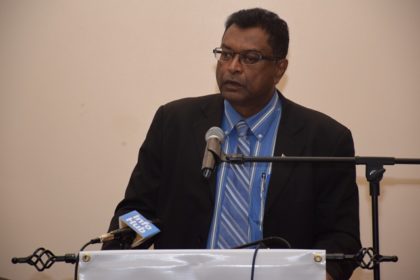 “This might sound cliché why we are making sure now that the bailouts that we are having for sugar will have to come to a halt… We need to at least up the millions that we have been giving for the allocation for the youth empowerment and education so that they can get employment opportunities” the Minister explained.

According to Minister Ramjattan, the government continues to be guided by a number of reports and studies as it relates to its investment in youth development. He highlighted the United Nations (UN) Report on Violence Against Children in the Caribbean as well, the 2010 United Nations Development Programme’s (UNDP’s) Citizens Security Survey, Household Drug Prevalence Survey Report 2016 as among some of the studies guiding the government’s strategies and investment in addressing challenges of youth, crime and violence.

He observed how by utilizing the findings of these reports are resulting in the rolling out of programmes that have the potential to transform the lives of youth that are at-risk to crime.

The Minister particularly pointed to the Citizen Security Strengthening Programme (CSSP). Minister Ramjattan observed that under the CSSP, approximately 4000 youths and adolescents from 20 communities countrywide are expected to benefit from skills training.  The programme is particularly geared towards age 16 to 25 out of school, unskilled, unemployed youths in communities that have a higher probability of turning to crime.

Turning his attention to other measures to be implemented by the government that will also be critical to addressing youth, crime and violence, the Minister pointed out that the Juvenile Justice Bill will be presented to the National Assembly by the end of July, 2017 and debated in October 2017. The Minister said, once the Bill becomes law, it will address some of the major issues affecting youths.  The Bill is expected to decriminalise crimes such as truancy and wandering and address issues of youth sentencing. It is also expected to address the age of criminal responsibility. Overall, the Bill aims to have a more modern juvenile justice system in Guyana that is also in conformity with the United Nations Convention on the Rights of the Child (UNCRC.)

However, the Minister pointed out that there are some financial constraints that are currently being ironed out with the help with United Nations Children’s Fund (UNICEF).

Minister Ramjattan explained that, “I have made sure that the consultation process went through successfully. Truancy, wondering, economic crime are going to be abolished and they are not going to be made crimes anymore because the days for those are long gone”.

Youth advocate Derwayne Wills, who spoke at the event reiterated the call for a Ministry that deals specifically with 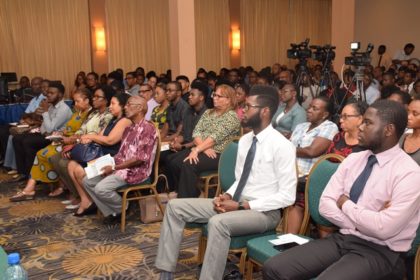 A section of the gathering at the Youth, Crime and Violence forum.

youth. Pointing to the recent reports on the behaviour of youths who are involved in a number of criminal reports, Wills stated that, “it is time, we revise the idea of a youth Ministry”.

Marchi urged the government and partners involved in youth development to, “pay specific attention to youth and to the area of juvenile justice and to have an approach which is to rehabilitative and aiming of reintegration rather than punitive approach”.

The forum which had a large turnout saw the presence of Professor Ivelaw Griffith, Vice-Chancellor of the University of Guyana, the Caribbean Community (CARICOM) Anti-Gang Project Pastor Eworth Williams and Sociology Lecturer of the University Andrew Hicks.