─ persons were living in the ‘wilderness’ for 23+ years

Attorney General (AG) and Minister of Legal Affairs, Basil Williams SC., has said that the government will remain in office until elections are held and a president is sworn in. In the meantime, he has given assurance that the administration will continue to work in the best interest of every Guyanese citizen, regardless of their race or creed.

Minister Williams made this disclosure during an interactive meeting with the residents of Beterverwagting and Triumph, East Coast Demerara (ECD). Minister of Natural Resources, Raphael Trotman and Minister of Public Telecommunications, Catherine Hughes were also present at the meeting.

While challenging persons to examine the track records of the past and present governments, the Attorney General said:

“We are transforming this country… our city is clean, even with heavy rainfall the water drains off quickly now. Communities that were without lights, now have; those who were without water have now; who never had proper road have roads now.”

Recalling what existed in the past, the Attorney General said that the persons were living in the ‘wilderness’ for 23+ years. The administration met a dirty city, corruption and a Narco-state blacklisted by the Financial Action Task Force (FATF).

The AG declared that it is not by accident that the Nasdaq Index, the second-largest stock exchange in the world, has reported that Guyana is the number one among the five fastest growing economies in the world and that the International Monetary Fund (IMF) projects that our economy will grow 18 to 20 per cent by 2020. This, he said, is as a result of the APNU+AFC Administration under President David Granger leadership.

“It is almost a miracle that we can be listed as the fastest-growing economy in the world. We had to come out the black in both countries. So, what we have been doing, is that we were cleaning this economy of dirty money. That’s what they [previous administration] were running on. They weren’t running on any legitimate business economy. There was a parallel economy that was operated on underground money, transnational crime money. We became a failed state under that government and so in cleaning the money it frees up the economy and that is how we can talk about being the fastest growing economy in the world.”

Recognising the extensive amount of work done in just four years by the Coalition Government, the AG said the opposition used one of the government’s members of Parliament to go against them on December 21, 2018.

However, he made it clear that “this treachery cannot derail the work of the government,”

The minister reiterated that the government will remain in office until an election is held following House-to-House Registration to ensure the current voter’s list is sanitised.

Prior to the community, the minister also held a walkabout where he interacted with residents of the communities. 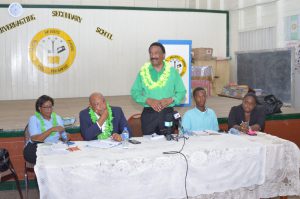 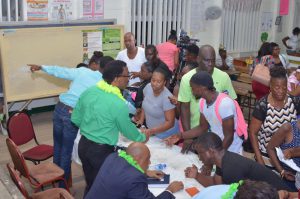 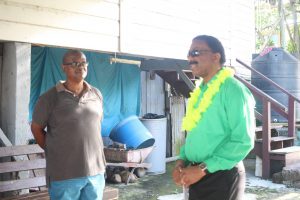 Attorney General and Minister of Legal Affairs, Basil Williams SC. interacting with a resident of Beterverwagting, East Coast of Demerara. 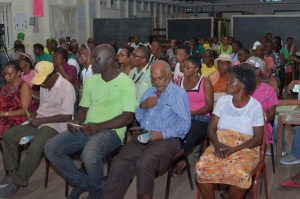 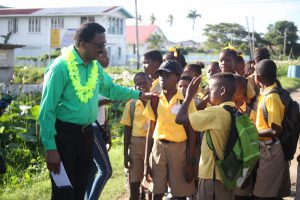