The Guyana Power and Light Incorporated (GPL) on Tuesday, donated a $400,000 cheque to the Cancer Institute, as the utility company continues to observe its eighteenth anniversary. 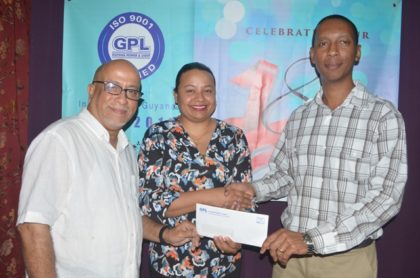 In brief remarks, GPL Projects Division Manager, Ryan Ross said the company recognises the good work that the institute has done over the years, hence the decision to make a meaningful contribution that will serve to benefit facility and its patients. He added that the donation is part of the organisation’s corporate responsibility and expressed optimism that it will make a difference in the lives of those battling the disease.

The Cancer Institute which opened its doors on June 6, 2006, was formed through a collaborative effort between the Ministry of Health and Global Imaging Services Incorporated. Among the services offered by the institue are CT scans, pap smears, chemotherapy, mammograms, external radiation therapy, intracavitary therapy and medical consultations.

Sonologist, Internist and Outreach Director Dr. Syed Ghazi, expressed gratitude the donation, noting that it will be utilised for patients who are unable to pay for their screening and other services offered.

“It is indeed a great pleasure for us and heartfelt thanks to Guyana Power and Light Incorporated (GPL) for feeling the pain of the people who suffer. We at the Cancer Institute work around the clock, 24/7 hours, 365 days. We are providing services for the betterment of humanity that we considered ourselves Yeartober instead Pinktober”, Dr. Ghazi said.

He added that the institute continues to be dedicated to helping persons fight against cancer and commended GPL for adding charitable works to their anniversary celebration’s activities.