Georgetown, Guyana – (March 1, 2017) President David Granger, today, met with China’s Ambassador to Guyana, Mr. Cui Jianchun at State House to discuss the strengthening of cooperation between the two countries. The Ambassador was accompanied by Deputy Chief of Mission, Mr. Yang Chenqi and Economic and Commercial Counsellor at the Embassy, Mr. Shen Huiyong. Chief of Staff of the Guyana Defence Force, Brigadier Patrick West was also present.

During the meeting, President Granger explained that poor infrastructure, particularly in the hinterland, has impeded the development of tourism, agriculture, and the extractive sectors and has been a deterrent to foreign investors. Noting that there is an existing cooperation agreement between the GDF and the Chinese military, the People’s Liberation Army (PLA), the Head of State said that Guyana could benefit tremendously from infrastructure development training for GDF officers. “We want to develop a strong engineering corps at the GDF so that they can make a bigger contribution to infrastructure development in this country,” the Head of State said.

The Ambassador informed the President of his plan to convene a forum to further engage the Government of Guyana in discussions so as to identify priority areas in which the two countries can collaborate. 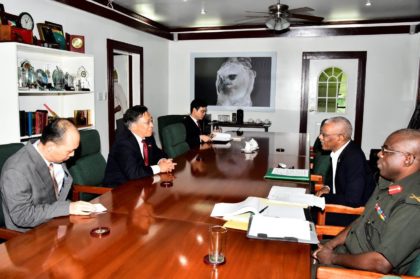 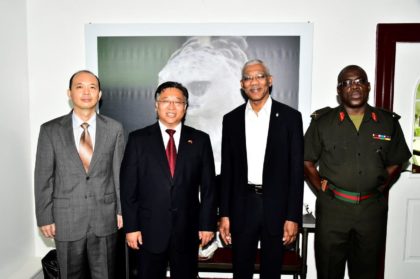