At the accreditation ceremony, in the presence of Minister of State, Dawn Hastings-Williams at the Ministry of the Presidency, Ambassador Pujianto acknowledged President Granger for Guyana’s support for Indonesia’s candidature as a non-permanent Member of the United Nations Security Council. 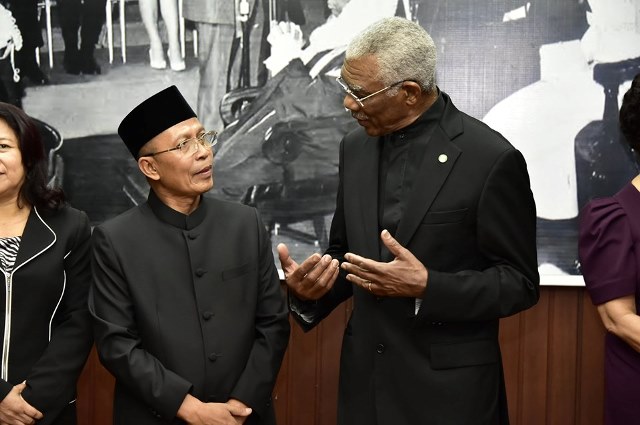 President David Granger, this morning, accepted the Letters of Credence from Julang Pujianto at the Ministry of the Presidency, accrediting him as the new Ambassador of Indonesia to Guyana. 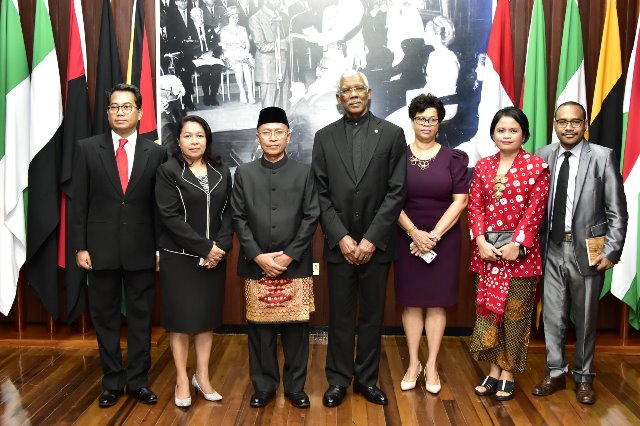 President David Granger, this morning, accepted the Letters of Credence from Julang Pujianto at the Ministry of the Presidency, accrediting him as the new Ambassador of Indonesia to Guyana.

Ambassador Pujianto gave assurance that over the duration of his tenure in Guyana, he will continue the cordial ties enjoyed by both countries, which are founded on mutual non-interference in each other’s internal affairs, mutual respect for each other’s territorial integrity and sovereignty, cooperation for mutual benefit, respect for international law and treaties and the maintenance of international peace and security.

During remarks, President Granger stated: “Excellency, I am pleased to accept the Letters of Credence accrediting you as Ambassador of the Republic of Indonesia to the Co-operative Republic of Guyana. I congratulate you on your appointment and welcome you to Guyana, my country.”

Guyana and Indonesia, the President highlighted, are both vulnerable to the adverse effects of climate change. Guyana is in transition to becoming a ‘green state’ which will see an increased emphasis on the protection of our environment, the preservation of our biodiversity, the promotion of renewable energy generation and the adoption of practical measures to ensure climate adaptation.

“Guyana looks forward to working closely with Indonesia at the bilateral and multilateral levels to ensure international peace and security and to encourage increased global efforts to reduce the adverse effects of climate change,” the President disclosed.

Guyana and Indonesia established formal diplomatic relations on August 27, 1999, and have collaborated at international forums, such as the Non-Aligned Movement and the United Nations, among other areas.

Images: Ministry of the Presidency