Cabinet will address the United Nations (UN) Secretary General’s (SG) decision to refer the Guyana/Venezuela border controversy to the International Court of Justice (ICJ) this week.

“The immediate work has already begun the Ministry of Foreign Affairs and its advisory team and its lawyers met all day yesterday into the evening and they mapped out the broad options, the issues that needed immediate attention and those for which the cabinet has to give policy guidance,” Minister of Foreign Affairs, Carl Greenidge, told local media today at the Pegasus Hotel, Kingston. 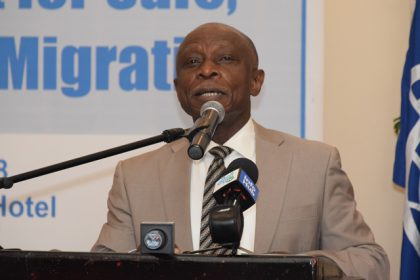 Minister Greenidge, in response to questions from the press, reinforced that the ICJ has to pronounce on what is essentially a legal contention raised by Venezuela. “We are not setting out in the court to get the court to go now and mark boundaries that is not the issue. The issue is simply an allegation made by Venezuela in 1962 that a treaty that they’d honoured for 61 years is null and void.”

The UN SG last Tuesday announced he is referring the matter to the ICJ. For Guyana, the decision marks the ending of a decades-old controversy. In 1962, Venezuela claimed that the Arbitral Award of 1899, which established the border it shares with Guyana, is null and void.

However, Venezuela has criticised the decision stating only the 1966 Geneva Convention can reach a peaceful solution. The two countries, under the 1966 Geneva Agreement, turned to the UN Secretary-General to resolve what became a controversy under the Charter of the UN.

Guyana maintains that it has exhausted the means of settlement provided in the Geneva Agreement. Minister Greenidge pointed out that no country can unilaterally decide “what are its obligations and the world’s obligations”.

“You are in a community you are not an island as a country. You can say whatever you like but you cannot pronounce on the law which is an international one. The law that we are making reference too is internationally fashioned it’s not a Venezuelan one,” Minister Greenidge said.

A pronouncement from the ICJ would be “very comforting” to investors and others interested in Guyana. “It solves our problem as regards perception and other peoples understanding of our rights and our borders and our sovereignty and so forth,” Minister Greenidge said.