The polls have closed, the votes are in, the counting has begun and the electorate has spoken.

While many were prepared to cast their ballots as soon the gates of the polling stations opened across the country, some chose to utilize the last few hours to exercise their civic duty.

Krystal McDowall with her two children. 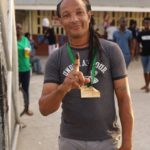 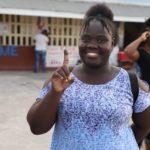 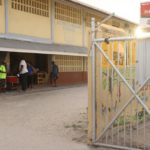 St. Pius Primary saw quite a few last-minute voters who walked out proudly with their inked fingers.

Krystal McDowall, hailing from Middle Road, spoke of the significance of voting and its effect on the country.

“I think it’s very important to exercise your constitutional right. We all have a role to play in voting to see a better future for ourselves and our kids,” the mother of two stated.

“It’s very important that we come out to vote because it gives us the privilege to choose who we want to lead us in this country,” Van Veen clarified.

Polling stations throughout the nation saw Guyanese from all walks of life, from the young to old, from different ethnic backgrounds casting their ballots for the party of their choice.