Guyana observes 85th birth anniversary of the Emperor of Japan

– Guyana Mindful of Japan’s role in fight against climate change

Guyana joined the people and Government of Japan in celebrating the 85th birth anniversary of His Majesty the Emperor of Japan, Tsugu Akihito on Wednesday evening.

During a reception held at the Pegasus Hotel Guyana, Japan’s Ambassador to Guyana, Mitsuhiko Okada remarked that Guyana and Japan have “strengthened and affirmed support and cooperation in areas of mutual interest.”

The Ambassador highlighted that climate change is a matter of great concern for both countries and further congratulated the government on its Green State Development Strategy (GSDS).

The Ambassador noted that this shared interest led to the commencement of Japan’s grant for the “Project for the Introduction of Renewable Energy and the Improvement of Power System.” He highlighted that the “development cooperation in the area of climate change is not limited to this grant.”

Japan is currently collaborating with the United Nations Development Program (UNDP) to support Guyana in enhancing its disaster preparedness and climate resilience. 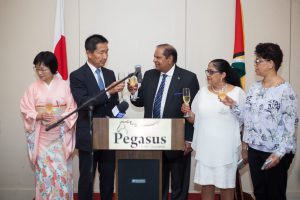 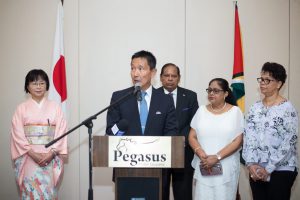 Prime Minister, Moses Nagamootoo stated the Government of Guyana is mindful of Japan’s Caribbean Climate Change Partnership (J-CCCP) initiative which is primarily aimed at strengthening the capacity of eight CARICOM territories in the areas of mitigation and adaptation technologies. He said that the initiative is one which is welcomed noting that it not only aligns with the country’s commitment to the establishment of a ‘green’ state but is also compatible with the commitment to the 2030 agenda for Sustainable Development and Paris Agreement on Climate Change.

“Guyana believes that Japan’s firm stance on the fight against climate change has been one of your nation’s most relevant and impactful endeavours since your accession to the United Nations Framework Convention on Climate Change,” Prime Minister Nagamootoo told the Japanese Ambassador.

The Prime Minister added the issue of climate change is the ideal opportunity for both countries to promote this “common interest” and urge “the international community to adopt a sustainable approach to managing the earth’s resources in an effort to mitigate the negative impacts.”

“Guyana, therefore, looks forward to advancing cooperation with Japan in this, as well as other fields and wishes, to once again express gratitude to the Government of Japan for its contribution to Guyana’s Green Agenda through support facilitated under the Japan-Caribbean Climate Change Partnership Project (J-CCCP).”

On the bilateral front, since the establishment of diplomatic relations between Guyana and Japan almost 51 years ago on June 11, 1969, the two countries have shared and maintained a mutually beneficial relationship.