The Carifesta Avenue/Vlissengen Road Roundabout Project is half way done and the Ministry of Public Infrastructure (MPI) has advised that some temporary road closures will be necessary to complete the project. This will result in some inconvenience to motorists and road users and the ministry is asking the public exercise patience and to use alternative routes from Wednesday August, 23rd. Weather permitting, the traffic disruption will last for just three weeks. 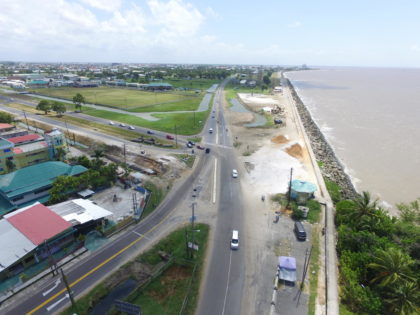 An overhead of the Carifesta Avenue, Rupert Craig Highway and Vlissengen Road junction

Traffic will be diverted through Alexander Street, and MP I Maintenance Engineer Sherod Parkinson is urging road users “to take precaution as they use Alexander Street, David Street and Barr Street to access lower Georgetown.”

Parkinson also explained that the contractors need to connect the newly installed pumps at the Kitty Pump Station where a major sinkhole had developed several months ago. This has since been filled in prior to the commencement of the roundabout project.

Parkinson also disclosed that the first and second phases of the project are completed. The third phase will see works on the Sandal Place section extending to the centre of the carriage way.

Once the third phase of the project is completed, the final phase of connecting all the roads – Carifesta Avenue, Seawall Road, Rupert Craig Highway and Vlissengen Road will begin. This $127.1M road improvement project is due to be completed by year-end and will allow for a smoother and unhindered flow of traffic at the busy intersection.

The roundabout will reduce waiting and stoppage time for motorists heading to the East Coast of Demerara and those using Carifesta Avenue, Vlissengen Road and the Kitty Public Roads.