Guyana’s future is in your hands – Min. Allicock tells Rupununi

Minister of Indigenous Peoples’ Affairs Hon. Sydney Allicock this evening reminded thousands of Rupununi residents of the transformation that has occurred in Region 9 under the Coalition government over the past four years.

Minister Allicock was speaking at the largest gathering in the region, for a rally at the Tabatinga Ground in Lethem.

Pointing to the fact that today, the region is the fastest-growing in the entire country, Minister Allicock underscored that this progress can only continue under the present administration who have the vision for transformative hinterland development.

“You have a role to play. Now is the time to move this country forward…the future of Guyana is in your hands,” he told the large gathering. 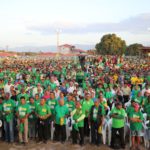 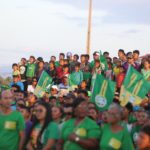 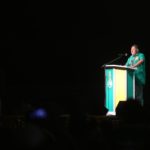 Minister of Indigenous Peoples’ Affairs Hon. Sydney Allicock addressing the gathering at the rally in Lethem

The Minister reminded that it was under the Coalition administration that local democracy was restored. This followed by the establishment of the four new towns of which Lethem was one.

This saw the new township equipped with paved roads, a magistrate court and provided with access to better health education, housing and water facilities among other critical services.

“This government took over a dusty village called Lethem. Today, the village is now a town. Yet they (the Opposition) are standing on a solid road with lights and claiming this government has done nothing.”

Minister Allicock also cited the establishment of community radio stations at Lethem and Aishalton, the availability of internet connectivity in hinterland schools and other public spaces.  And most recently a $130Million technical institute was established in Annai.

These he noted are just a few examples of His Excellency President David Granger’s commitment to the development of the hinterland regions.

“If you want continued progress, more opportunities for our Indigenous people…you have a duty to yourself and your children and this country,” Minister Allicock stated.