Visual art takes many forms in Guyana, but its dominant themes are Indigenous, the ethnic diversity of the population and the natural environment. Art portrays various ideas and feelings such as triumph, love, happiness and sorrow which were all on display by 12 Guyanese artists at CARIFESTA XIII. 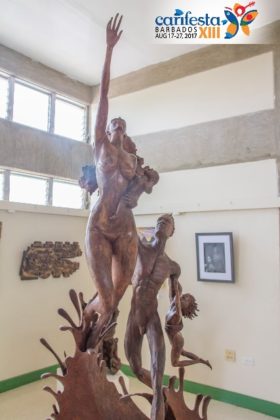 One of Winslow Craig’s art pieces which portrays the family.

A total of 33 art pieces, bringing to life our rich Guyanese culture drew the largest crowds at the art exhibition held at the Barbados Community College.

Head of the Visual Art team, Ivor Thom agreed that the responses to the visual art show has been great. He said, “the work we have is a surprise to almost everyone who comes to the exhibition.  We have the most crowds in this visual art exhibition. The exposure to our artists, especially our young artist Laron has done well for her and we can expect to see great things from her when she gets back to Guyana.”

Twenty-two-year-old Laron Gulliver the youngest artist on-board, is also a photographer and sculptor and a graduate of the E.R Burrowes School of Art. Her pieces are part of a series called Afro Centric which portrays how one can use their African culture to form self-identity- the way one looks, dresses, acts, values and beliefs.

Gulliver said inspiration for her work came during her teenage years when, “I had self-esteem problems and now I’ve grown to accept myself in today’s society so I show my journey through my work so that others can relate to it.”

The young artist though proud of her accomplishments, believes she has a long way to go and more to learn. After viewing the work of other Caribbean artists at the festival Gulliver believes she has to experiment more with different mediums; including using photography as a story telling tool to display issues in the Caribbean.

She encourages youths struggling with self-esteem and identity issues to be proud of themselves. “We as a people have a lot to offer through our culture, we find that other cultures often look to us for inspiration and ideas, so be proud.” 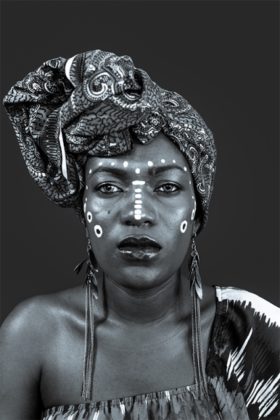 at an early age and has discovered many things along his artistic journey. One such important discovery is “that I am just a small channel through which creative energy flows” which inspire his craft and sculptures.

Craig’s artwork covers several themes from the family to a man’s strength. He uses materials including wires and his own creation called “Sawdu,” a mixture of saw dust and glue. Humble and reluctant to discussn his many accomplishments Craig is grateful to be recognised for his work and plans to continue his journey as an artist for as long as he can

Curator of the National Art Gallery, Ohene Koama said the team of Guyanese artists is using CARIFESTA XIII as a platform to gain new markets and network with other artists in the region. They are also seeking inclusion at the CARICOM head table to discuss issues that will enhance visual arts in the Caribbean.

Koama explained the selection process for CARIFESTA artists was done via advertising – the artists submitted their pieces and the best were selected.

“We also embraced the green initiative, we met with Minister Henry and she urged that the works reflect our green initiative. But before this whole idea of going green, artists were already using recycled materials such as fallen trees and saw dust…. however, we are happy to be here,” Koama explained.