After a more than ten-year hiatus, the Guyana/Suriname Cooperation Council was convened for the seventh time in Georgetown earlier this week.

In opening remarks, the Honourable Carl B. Greenidge, Vice President and Minister of Foreign Affairs, recalled that the resuscitation of the Council was the product of the December 16, 2016 meeting in Georgetown between His Excellency President David A. Granger and His Excellency Dési D. Bouterse, President of the Republic of Suriname. Minister Greenidge reminded that the Council was conceived as an institutional framework through which cooperation between the two countries would be monitored. He added that the Council was a forum for the initiation and support of cooperation activities and for proposing solutions to possible difficulties with regard to the implementation of the various areas of cooperation. 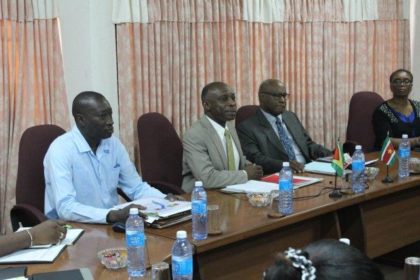 Also delivering a statement was Ambassador John H. Kolader, Senior Advisor in the Bureau of the Minister of Foreign Affairs of Suriname. He said the origin of the Cooperation Council lay in the meeting of the Prime Minister of Guyana and the Premier of Suriname at Chaguaramas, Trinidad and Tobago on April 10, 1970. Suriname gave high priority to the Council’s work in full recognition of its potential to improve the lives of both peoples and advance good neighbourly relations between Suriname and Guyana, he noted.

The two sides discussed procedural matters as well as the Council’s work plan and priority areas of cooperation such as agriculture, trade and tourism, transportation, health and the environment and climate change and committed to implement the work programme adopted at the meeting.

They used the opportunity to consider bilateral initiatives. Although these are not part of the mandate of the Council, they are critical to the maintenance and intensification of cooperation between the two countries.  In this regard, specific mention was made of cooperation in the security sector and the Canawaima Ferry Service. The Council noted that a meeting will be held on March 2 and 3, 2017 with the Canawaima Ferry Service Inc. and the Canawaima Management Company in Nickerie, Suriname.

The Guyana/Suriname Cooperation Council was established on July 19, 1989, through an exchange of Notes in Paramaribo, Suriname.  It aims to monitor all aspects of bilateral cooperation between the two countries and propose new areas for cooperation. The next meeting of the Council is scheduled for July this year in Suriname.

The meeting was chaired by Ms. Barbara Haley, Director of the Frontiers Department, Ministry of Foreign Affairs and by Ambassador Kolader. Also participating were representatives of Guyana’s Ministries of Agriculture, Business, Health and Tourism, among others from the respective Foreign Ministries.