‘Guyanese must disassociate themselves from denialism’

President David Granger, today, called on all Guyanese to disassociate themselves from denialism as he noted that inconvenient truths particularly about the country’s challenges must not be concealed but, rather, every person must contribute to crafting and implementing plans to improve education, employment and empowerment.  President Granger was at the time delivering the feature address at the Cuffy 250 State of African-Guyanese Forum, which was held at the Critchlow Labour College Auditorium.

“We should not allow people to deny that there are problems because that would obstruct us from implementing solutions. I believe Cuffy 250 is one of the solutions. Where there are problems, we must be courageous enough to admit there are problems and look for solutions and sometimes it calls for research. We must all do much more to quicken the pace at which social problems are solved, local democracy firmly re-established, community development improved and the people could enjoy a good life,” he said. 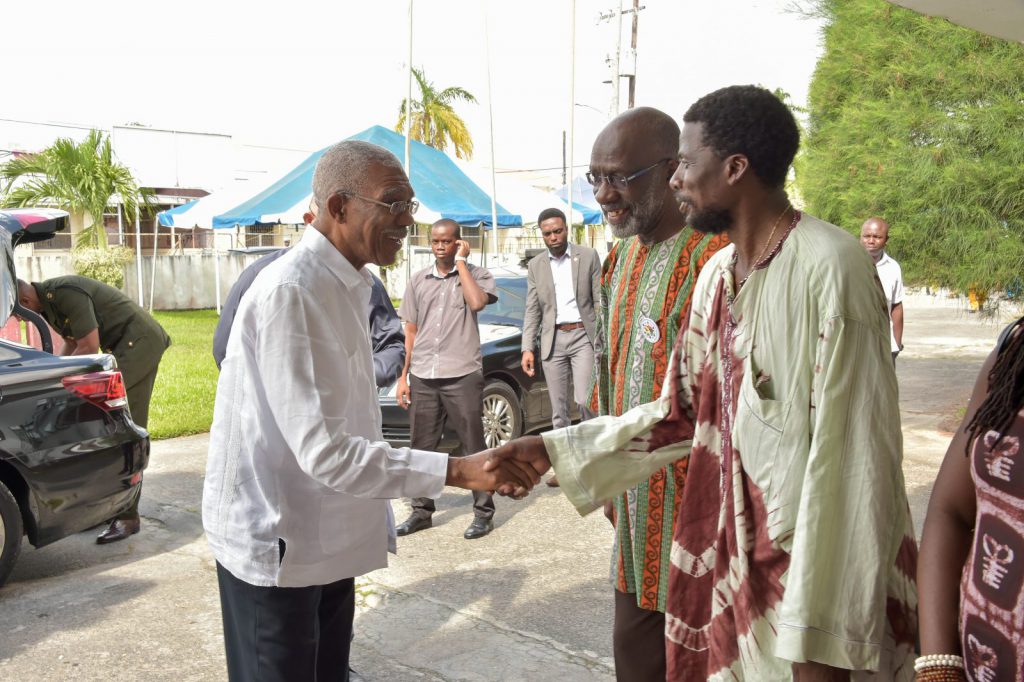 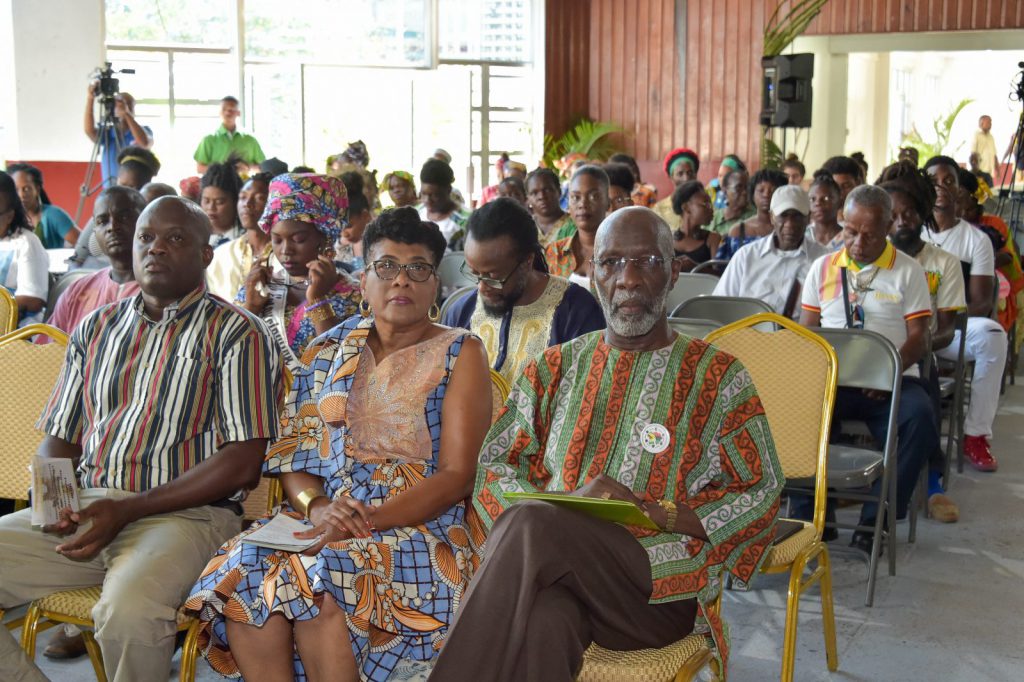 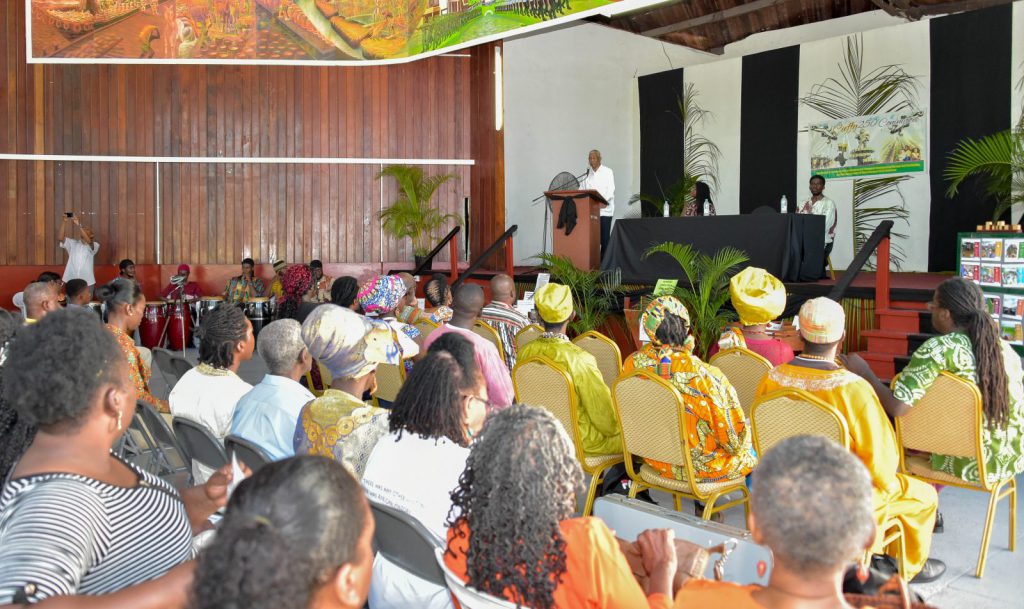 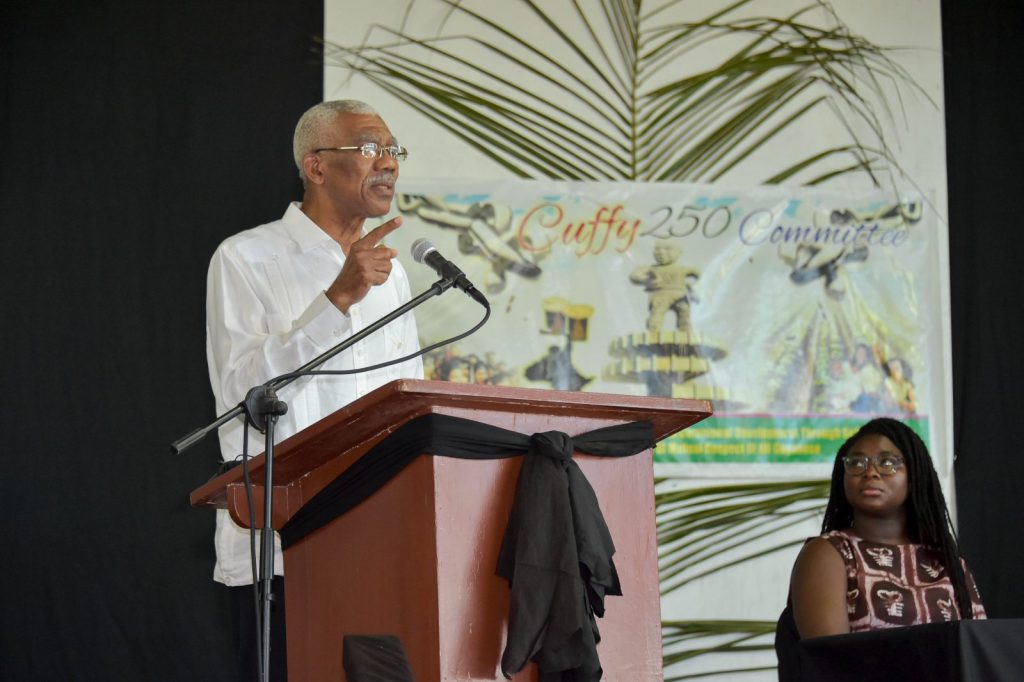 In his address to the Forum, President Granger said that Guyanese, in pursuit of a ‘good life’, ought to avoid the dangers of ‘denialism’. Noting that denialism distorts the reality of present-day conditions, constructs a false reality and leads, inevitably, to failure, the Head of State said that Guyanese deceive themselves and others when social reality is denied and this can lead to consequences.

“A prominent leader of one country, notoriously, denied the link between Human Immunodeficiency Virus (HIV) and Acquired Immunodeficiency Syndrome (AIDS) and because of that denial 330,000 people died because his Government refused to provide treatment to HIV-infected persons. Even today people deny the impacts of global warming.  Other prominent persons have described global warming as an ‘expensive hoax.’ Cigarette manufacturers have long denied the link between smoking and cancer. Denialism, in every phase of life, could have dangerous consequences but there is another side to denialism,” the President shared.

President Granger noted that this is a form of denial, which seeks to deny that this whole group in society has the capacity, the self-respect and self- esteem to transform their lives, to belong to political parties to improve their lives and to be culturally aware. “There has been no credible research to explain these reckless pronouncements. I am convinced that national problems can be resolved but they cannot be resolved by inventing fake theories and notions, which refute reality and impede the process of solving the problems that confront society. We need to examine causation and causation of pervasive social problems needs to be determined before correct solutions can be sought and implemented.

The Head of State noted that one of the main problems particularly, which affect Guyanese currently, are the rate of school ‘dropouts’, which see at least seven students leaving school per day, with the highest incidence being in public secondary schools where at least five students drop out every day. The rate of unemployment, which is estimated at 12 per cent of the labour force or about 37,119 persons is another problem plaguing the Guyanese community. Thirdly, he pointed to the alarming rate of teenage pregnancy, which is the highest in the Caribbean Community; more than 3,000 Guyanese teenage girls become pregnant every year.

He said that denying the prevalence and pervasiveness of these problems will not solve them. Instead, he issued a call for a concerted effort to successfully address them.  “These are big problems and we cannot deny that they exist. We cannot take our hands away from working towards a solution. We are seeking solutions and we need organisations like yours, non-governmental organisations and civil society, churches, religious organisations, Mandirs and Mosques to work together to solve these problems for all Guyanese particularly young Guyanese,” he said.

“The work of these institutes and centres is being supplemented by training programmes organised by the Board of Industrial Training [BIT] and by Practical Instruction Centres and Practical Instruction Departments in secondary schools.  We are working to ensure that 42 schools will have practical instruction workshops by 2020.  Robust efforts have been made to reduce school absenteeism and improve attendance particularly at public schools. Quietly, the Public Education Transport Service [PETS] (known popularly as the 3 B’s Initiative) has responded to the reality that many parents could not afford the cost of transport to send their children to school. PETS has had an impact on school attendance and household savings. The Service has distributed 1,184 bicycles, 27 buses and 9 boats.  More children are going to school. PETS is saving parents money; in some cases the savings can be as high as $48,000 per month per student – money which can now be funnelled into improving households,” the Head of State said.

He noted that unemployment is being reduced through the promotion of self-employment. The President said that it is his belief that once young people are given the training and opportunity, they will want to work, and therefore, the Government and civil society must help to provide them with the training, opportunities and resources.

“Almost 400 community projects – financed under the Sustainable Livelihoods and Entrepreneurial Development [SLED] project, the Community Organized for the Restoring the Environment [CORE] project, the Amerindian Development Find [ADF] and the Basic Needs Trust Fund [BNTF] – have been granted $3.7B.  These programmes are not to be laughed at,” the Head of State said.

Further, Micro-financing interventions – the Linden Enterprise Network (LEN); the Micro- and Small-Enterprises Development (MSED) project and the Hinterland Employment and Youth Service (HEYS) – have provided G$1.2 B in grants and loans to more than 3,000 young entrepreneurs, including first-time business start-ups.

“We are also working at improving the quality of workers’ lives. Workers’ standards of living are being improved. Public servants’, including teachers have had their minimum wage raised by over 50 per cent since this administration took office. So there have been interventions not by denying the capabilities of Guyanese to respond, not by saying that they don’t have cultural roots but by giving them tools to become self-reliant and develop their self-esteem. There is no cultural blindness. Once they are given the assistance they can see their way forward,” the President expressed.

Ms. Elsie Harry Ross, member of the Cuffy 250 Forum in response to the President’s remarks pledged to ensure that the Committee is vigilant and does not become a victim to denialism.