“How dare you talk about no confidence?”- Min. Broomes to Opposition

– Opposition Leader does not qualify to speak about confidence

– under PPP regime workers were subjected to deplorable conditions

– every sector was in shambles

Minister within the Ministry of Natural Resources, Simona Broomes, in a passionate rebuttal during the debate of the PPP-led no-confidence motion in the National Assembly, said Opposition Leader, Bharrat Jagdeo, in whose name the motion was moved is not qualified to speak about confidence given his regime’s track record. 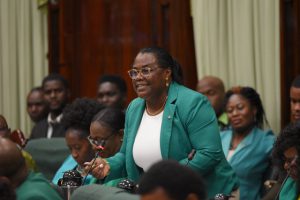 Minister within the Ministry of Natural Resources, Simona Broomes during her rebuttal of the PPP-led no-confidence motion in the 111th Sitting of the National Assembly.

Minister Broomes said when the Coalition Government took office in 2015, every sector was in shambles. Citizens in the Capital city, the minister noted, were living in filth and had no access to potable water, proper roads and street lighting. All of which have been provided over the three years of the Coalition’s leadership.

She noted that it was a lot to be done for such a short period, but the Coalition Government took up the challenge and delivered on their promises to the people of Guyana.

The minister questioned what the PPP government did for the development of the country over its 23 years in office.

She reminded of the Lindo Creek miners and the turmoil their families were left under following their dreadful demise. A Commission of Inquiry was established under Government to bring closure for the families

“We are moving beyond the corruption and it will take some time,” Minister Broomes told the House.

Reference was made to the transformation of Mahdia, Port Kaituma, Bartica and even Kitty, Georgetown. Minister Broomes, who once held responsibility for Labour, reflected on the deplorable working conditions of the sugar workers and even miners under the PPP administration.

She encouraged the opposition to join forces with the government to help move Guyana forward as she encouraged them to withdraw the motion. Minister Broomes restated her full confidence in the Coalition Administration.