Minister of Finance Winston Jordan today met with a team of representatives from the Inter-American Development Bank’s (IDB) IDB Invest and IDB LAB, at his Main Street office.

The team was led by James Scriven, CEO of IDB Invest who explained that the financial institution is currently exploring the possibilities for an expanded role in providing advisory and financial services to local private and public sector agencies. 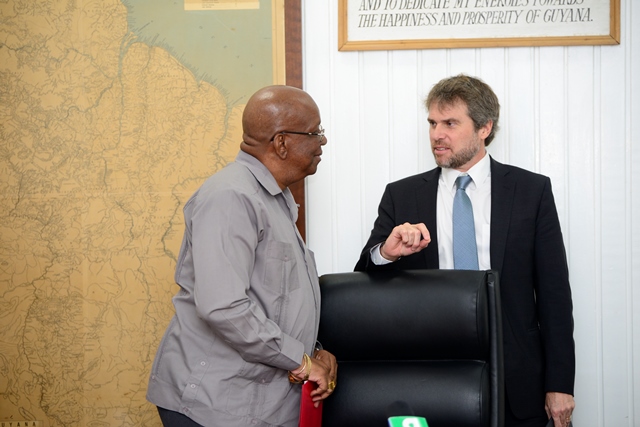 Minister of Finance, Winston Jordan with representatives of the IDB and Ministry of Finance.

“Let me give you a sense of some of the things that we are looking at. On one hand, we have become largely a climate finance institution. When it comes to the Caribbean the reliability and the cost of energy has become a major issue and we have together with a number of our partners come up with a number of facilities that we rolled out in a few countries like the Bahamas. We have been very adamant to work with our private sector partners to help them reduce the cost of electricity, put solar panels on etc.,” he explained.

In addition, Scriven says the institution, through its recently launched IDB LAB facility, is prepared to provide advisory services in the areas of corporate governance, institution building and energy audits among other critical areas as well as to finance solar and renewable energy projects at a minimum cost of approximately $209M (US$1M).

“We have come up with a facility that allows us to deploy money very quickly. In smaller entities US$1M or US$2M is not a big issue for us, we can do it relatively fast… that’s particularly when it comes to renewable energy.  Another thing that you said is that some of the larger companies over here are probably over-banked and there are a number of companies that are under-banked. With that comes a bigger role that we plan to play in advisory services… So, our advisory services manager is looking at areas that we can support companies to grow,” Scriven explained.

Meanwhile, Minister of Finance, Winston Jordan says he is happy for the IDB’s show of confidence in the local economy and looks forward to working with the institution for the diversification of the economy despite the imminent start of petroleum production activities.

“I believe the advisory will have to play a pretty important role in going forward in making some of these ideas bankable and becoming a success. The earlier we can show some model business with some success, I believe you will have more people coming onboard and replicating it as we go through. Exciting times for the private sector and I believe not only with oil but the whole context of broadening the base and diversifying,” Minister Jordan said.

IDB Invest aims to be the partner of choice for the private sector in Latin America and the Caribbean. It finances projects to advance clean energy, modernise agriculture, strengthen transportation systems and expand access to financing.