President David Granger, today, met with President of the Inter- American Development Bank (IDB), Mr. Luis Alberto Moreno, who commended his leadership in ensuring that the necessary systems and policies are put in place to manage the looming oil and gas sector and the wealth which will be accrued.

At a meeting held at State House, Mr. Moreno said that the President’s leadership in this area particularly, cannot be understated and the benefits of it will be seen in the management of the sector when it comes on stream.

“I think when people write the history of Guyana some years from now, they will look at this period in time and see how the Guyanese people and the Guyanese leadership thought about how they can deal with one of those things that can only happen in once in a lifetime.  It is in this regard that we have been privileged to work with you President Granger, as you prepare things that are so timely like your Sovereign Wealth Fund and as you continue to push forward.  Your leadership in this has been very central and we are very happy to be side to side with you.  I am convinced that the best days of Guyana are ahead of us and they would be materialised largely for all the work that you have been doing to cement that future for the Guyanese people,” he said.

President Granger said that he welcomes the support of the Bank and looks forward to working more closely with the institution in the coming months in other areas such as climate related financing, infrastructure development and support for migrants.

“I want to express our appreciation to you for your concern towards Guyana. We are certainly very appreciative of your stewardship and we wouldn’t have gotten this far if you didn’t have Guyana at heart. We have a long-standing relationship with the Bank and especially with your support in the oil and gas sector.  The Bank has been at the forefront and has given significant support.  We will continue to look forward to your support as we try to build very strong, sturdy and robust policies for the sector,” President Granger said. 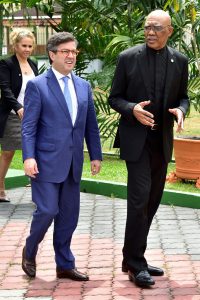 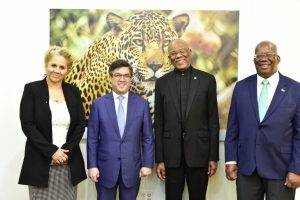 To this end, Mr. Moreno assured that the Government can look forward to continued support from the entity as it seeks to enable the country to benefit in the best ways possible.

President Granger and Mr. Moreno also used the opportunity to discuss the Guyana/ Venezuela border controversy as well as support and possible areas of collaboration for climate financing and to advance dialogue on the ‘Guiana Shield.’

Meanwhile, at a special luncheon held at the Baridi Benab immediately after the meeting, Minister of Finance, Mr. Winston Jordan in his remarks said that Mr. Moreno’s visit is the first under this administration and serves as a testimony of the long and enduring friendship between the Bank and Guyana.

“It signals the Bank’s commitment to the development of Guyana and is also an indication of your deep interest in the development of Latin American and Caribbean countries.  During your stewardship, much has been achieved including a major increase in the Bank’s capital and increased emphasis on climate related matters, which are dear to Guyana. As Guyana stands on the cusp of a transformative development, made possible by our growing oil resources, the Government will be looking to its development partners such as the IDB to assist in strengthening institutions, policies, legislations and systems toward ensuring that the Guyanese populace from the country’s endowment,” Minister Jordan said.

Just last month, Minister Jordan signed two loans with the bank to the value of US$31M for the establishment of an Electronic Single Window for Trade and the Energy Matrix Diversification and Institutional Strengthening of the Department of Energy.

In December 2018, an agreement was signed for a US$11.6 million loan, which will prepare Guyana for its transition towards becoming a major oil and gas producing State. The project is designed to support the strengthening and the sustainability of the energy sector in Guyana by contributing to the institutional development of oil and gas governance and the development of cleaner energy sources for electricity generation.