IICA hands over Rupununi Survey Working Document to Agri. Minister – to address irrigation in the savannahs

Irrigation is an important pre-requite to agricultural development in the Rupununi and intermediate savannahs as the Ministry of Agriculture advances the cause of moving the country’s agricultural base away from the coast.

Today, Inter-American Institute for Cooperation on Agriculture (IICA), Country Representative, Mr. Wilmot Garnett, handed over the Rupununi survey working document named, “The effects of El Nino in the Rupununi (Region 9)- Guyana”. The IICA has assisted the Ministry in having the working document completed. 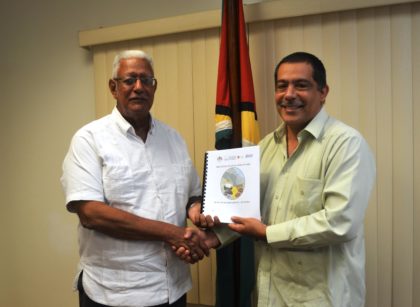 Agriculture Minister, Hon. Noel Holder, lauded the institute for its continued support, which has over the years significantly assisted Guyana’s agricultural needs. He added that the document, which was much needed, remains imperative for better understanding the impact of the El Niño phenomenon and to improve preparation and response to such disasters.

” The survey is an assessment to determine the positives and negative impacts of the El Nino on agriculture and other socio-economic parameters of the Region. Restoration and resilience will require a number of short, medium and long-term interventions and the document will significantly assist us in this regard,” the Minister said.

Meanwhile, IICA’s Country Representative in an invited comment noted that while the el Niño episodes had resulted in water shortages countrywide, Rupununi was hard-hit, hence IICA’s decision to assist.

“Though the el Niño was expected, the lack of data and an evaluation of the previous episodes hampered preparations to alleviate its impacts. Since Guyana is likely to experience an el Niño every so often, it is important for the country to garner an understanding of the impacts and use the information to guide future plans,” Mr. Garnett said.

The survey looks at the effect the drought-like condition has on the region’s socio-economic situation, water deficit, health, education, food security, trade among others.

This move augurs well for the future of Agriculture in Region 9 and the Ministry’s vision of reducing the risk of climate-related disasters through a holistic, evidence-based approach. The document presents specific findings for the Rupununi and includes lessons and recommendations for addressing future el Niño events in the region.