The Government Information Agency (GINA) recently sat down with the Managing Director and staff of GWI to talk about how the company has been addressing these challenges. GINA learnt that, within the last two years, not only has GWI corrected several of these issues, but it has also managed to improve pressure, quality and continuity of the water supply service to their customers, within the time period.

Two of the main concerns of the water supply systems are efficiency and reliability. In addressing these however, GWI must first confront a decades-old system, which was poorly planned and maintained.

The Georgetown water distribution network is very old. The pipe network is in a very poor condition, and breakages due to corrosion had compromised water pressure, water supply and water quality. However, over the past two years, there have been continuous rehabilitation and upgrades of the Georgetown and other water distribution systems, resulting in several areas which were receiving an intermittent supply of water now receiving a more reliable supply.

According to GWI’s Managing Director, Dr. Richard Van West- Charles more than 85 percent of the company’s facilities is now providing a 24-hour service including in Georgetown. This translates to approximately 60 percent of GWI customers receiving continuous service on a daily basis, Dr. Van West -Charles explained.

But, despite the continuous rehabilitation and upgrades of the system, water supply to certain areas such as Georgetown still presents several challenges and it all comes down to the issue of  the water system’s design, and planning that exists, Dr. Charles explained.

In many of these areas, what existed was a single water supply system. Therefore even with upgrades to the infrastructural network, such a system would still be significantly burdened to produce a continuous supply to large population areas.

GWI however, has been working to improve the water supply capacity of these systems by installing new infrastructure including wells, pipe mains, and trench crossings, within the past two years.  According to the Managing Director, the network redundancy will also provide for alternate paths for water to be delivered to residents in the event that a cable is broken or a connector accidentally is un-plugged in the old water system.

According to GWI, it also began examining the issue of network connection. The water company has been working to ensure that its network is connected in such a way that if a pump fails in one area, it can shift water from one area to another area, Dr. Van West-Charles highlighted.

Addressing the issue of redundancy, new wells have been drilled in GWI’s shelterbelt compound, in Sophia, Diamond, Bartica and in Wakenaam, among several other areas. The construction of new infrastructure also took into account, improving the network to meet the growing demand for water across the country. These interventions allow for residents in over 43 communities to receive water for the first time, benefitting over 45,300 people directly.

Another issue that GWI has been seeking to resolve relates to energy requirements of its infrastructure. The water company relies solely on the Guyana Power and Light for power. Therefore, when there is a power outage, the result is significant downtime of GWI infrastructure.

This issue has particularly been plaguing the provision of a 24- hour water supply to GWI’s customers in Region Three. GWI is however, working to correct the issue.  According to the Region’s Divisional Manager, Martin Garrick, GWI has begun to resize its units to fit the imbalance and larger voltage tolerance from the power company.

The World Health Organisation (WHO) has an extensive list of quality parameters for potable water (drinking water), some of which GWI has already achieved. The others, the water company is striving to realise, and within the past two years, has invested heavily towards this goal.

One of the WHO’s parameters which GWI has not yet been able to achieve relates to the removal of the iron content in the water. To correct this situation, within the past two years, GWI has established a new water treatment system to 16 pumping stations across Regions Two, Three Four, Five and Six. It rehabilitated 24 treatment plants’ filtration systems.

The water company also began collaborating with a Dutch Water Company to improve iron removal efficiencies at its water treatment plants. But even as GWI worked to improve the quality of the water being supplied from each of its system, steps were also being taken to ensure that the water source is being properly protected from potential contamination, and that the treatment system is operating efficiently. By and large, this process is being facilitated at the GWI’s Central Laboratory, located in Da Saliva Street, Newtown, Kitty.

However, a new initiative of the water company will soon see the water being tested at the plant where the water is produced. GWI has begun establishing mini laboratories at its water treatment plants in all the regions. One such laboratory has already been established at GWI’s Shelter Belt treatment plant.

GWI’s focus on ensuring quality water is supplied, has also seen the company establishing a new water quality department within the area of its operations.

The water company’s effort to ensure water provided is of top quality has also seen a focus on the hinterland. GWI has purchased and begun distribution of Life savers C2 filters to schools and health facilities in the hinterland. Thus far, C2 filters have been installed in Kamarang Primary School and the Upper Mazaruni District Hospital, in Region Seven. The filters take the water from rivers and purify it, making it safe for consumption for the students and teachers in the schools, doctors, health staff and patients in the health facilities.

GWI has also purchased portable filtration units which have been distributed to communities including Kamarang, Kako, Quebenang, River View and Karrau for residents’ use. The two programmes have been crucial to the reduction of water- borne diseases in these hinterland communities, and also help in   improving the standard of living of the residents.

Over the past two years, GWI has expended in excess of $3Billion undertaking infrastructural and operational improvements across the country, in all 10 administrative regions. 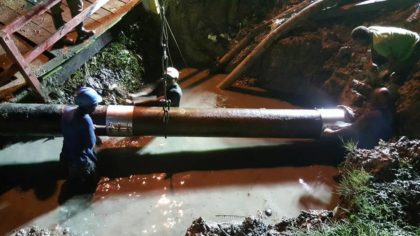 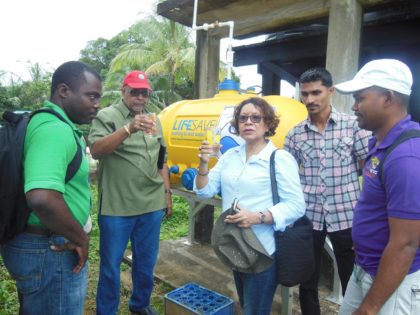 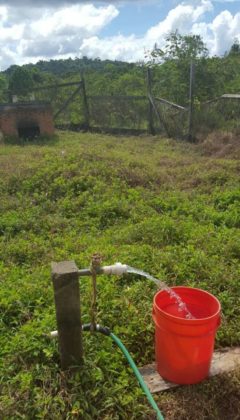 Water flowing from a stand pipe following completion of works 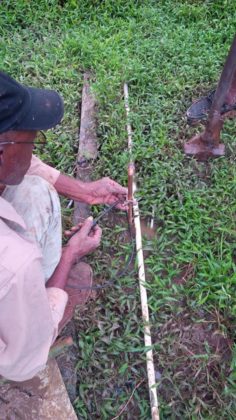 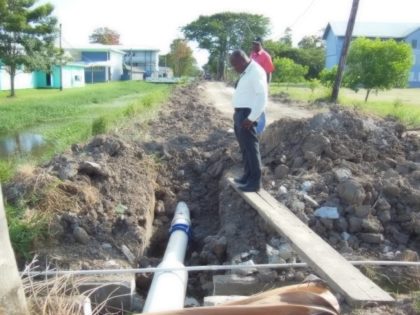 GWI workers inspect the transmission line from the Turkeyen well 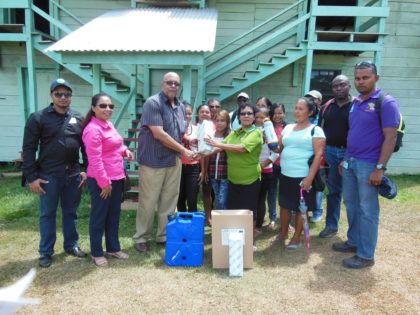 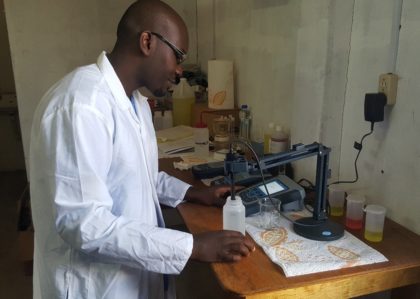