Installation of new pipeline at Cemetery Road to be completed today 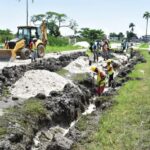 The Guyana Water Incorporated (GWI) is expected to complete the installation of some 700 feet of pipelines along Cemetery Road Georgetown by the end of Friday.

GWI’s Executive Director of Operations, Dwayne Shako said a decision was taken to abandon a section of the pipeline and install a new one along the roadway, following an assessment of breakage in the 14-inch water transmission line at the location.

The risk of working close to a flooded cemetery was also taken into consideration, he explained.

“It’s [the pipeline] much more into the cemetery [than previous ruptures] so for that reason, we will not be able to repair that main. The cemetery is submerged right now and the main and the tombs are at the same level so what we’re doing now is re-routing that line and moving that line along Cemetery Road and abandon that line within the cemetery,” Shako was quoted as saying in a recent report.

Acting Regional Manager, Eson Pearson, disclosed that the pipe runs approximately three feet away from tombs at the Le Repentir Cemetery, as such the decision was taken to relocate the pipes.

He relayed that “For the last 1 – 2 years we’ve been doing a lot of work here because it has ruptured on several different occasions, about six times. The pipelines have reached their limit, they’re rotten and can’t take the pressure of the water any longer.”

The project is at its final stage and the new lines should be active by the end of today.

The project is among several others that saw repairs done to ageing pipes around the city in recent years.