Residents of Jawalla Village, Upper Mazaruni Region Seven are now regrouping their lives after a freak storm struck on Friday, August 18, 2017. The squall of heavy winds and rainfall along with lightning and thunderstorms occurred around 15:30 hours and destroyed 34 buildings in the area. 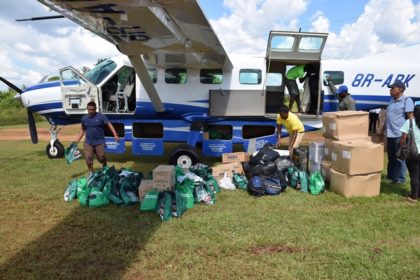 Relief supplies being off-loaded at Kamarang to be sent into Jawalla, Upper Mazaruni.

Roofs were damaged while other buildings collapsed. One of the collapsed buildings resulted in the death of 27-year-old Marsha Jordan who was seven months pregnant at the time. The death of Jordan and her unborn baby has sent the entire community into a state of shock and mourning.

At the time of the incident, Jordan and her two children were sheltering under the house from the heavy rains, when a strong wind caused the building’s support to weaken and came crashing down. Jordan sustained severe head and neck injuries and died instantly while her two children managed to escape death with minor injuries.

Major Sean Welcome of the Civil Defense Commission (CDC) and the Chief Medical Officer of the Ministry of Public Health Dr. Shamdeo Persaud accompanied the ministers to ascertain how their respective organisations could aid in the rebuilding of the community after the natural disaster.

Minister Garrido-Lowe said, “We were talking about how perhaps we can bring engineers, the army engineers to come and look at the structures of the houses to see how we can build strong houses to withstand these freak storms that happen every now and then, I understand now it is increasing.”

Upon assessing damaged buildings, especially those that collapsed, the team recognized the need for a redesign in the way wooden structures are built in the area. The building which crushed Marsha Jordan was considered a ‘disaster waiting to happen’. The elevated building was placed on wooden blocks approximately four feet off the ground.

With the redesigning of the structures, the residents have been urged to play their part in this rebuilding process. “I know 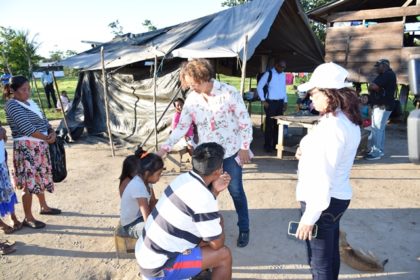 The CDC and the Ministry of Indigenous Peoples Affairs contributed building materials to the village and the Toshao has been tasked with mobilising men from the community to be engaged in the rebuilding of Jawalla. “In this case, where houses have been damaged we brought two power saws that can help, the villagers can saw and a lot of things can be done to bring immediate relief.” Minister Garrido-Lowe stated.

The two ministers also committed to being a part of the rebuilding process by making individual contributions.

“I can tell you I will be here to help paint and I am willing to donate some louvres for the windows and I’m sure minister Dawn (Hastings-Williams) would be here doing here part.” Minister Garrido-Lowe explained.

Meanwhile, a new home is to be constructed for Jordan’s husband, Gilbert Jordan and the two children, Carmeline and Zalepha Jordan. “It would be a good thing if the men of the community, come together, saw boards and let us build a new house for Mr. Gilbert Jordan and his daughters.” one of the ministers added.

The Civil Defense Commission will be supplying the villagers with relief supplies including food, cleaning agents other items needed for basic living. 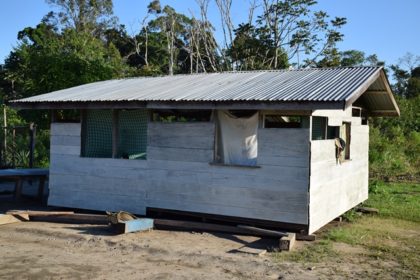 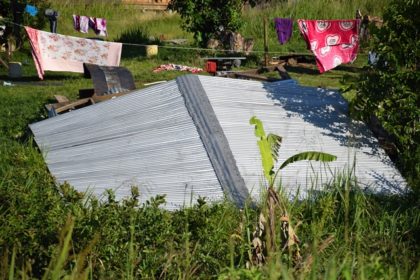