The Minister of Labour, Hon. Joseph Hamilton, today met with Chief Executive Officer of the Guyana Telephone and Telegraphy Co. Ltd. (GTT), Justin Nedd, and the company’s Attorneys to deal with issues pertaining to the Guyana Postal and Telecommunications Workers Union (GP&TWU).

The meeting was called to discuss issues regarding redundant workers, which the Union contends, are owed severance payments by GTT.

“I want a resolution of the matter. The attorney for GTT wrote to me outlining some of the issues as he sees it. I am to engage the GP&TWU to get their perspective on the matter when I met the GTUC they were part of the delegation, but we didn’t go into all the issues,” Minister Hamilton said before the meeting.

The Minister emphasised that he wants to hear the matter from all parties involved so that it can be resolved soonest.

“All these unresolved issues, I’m attempting to have them resolved, So I’m hoping we have some movement in the conversation,” Minister Hamilton stated. 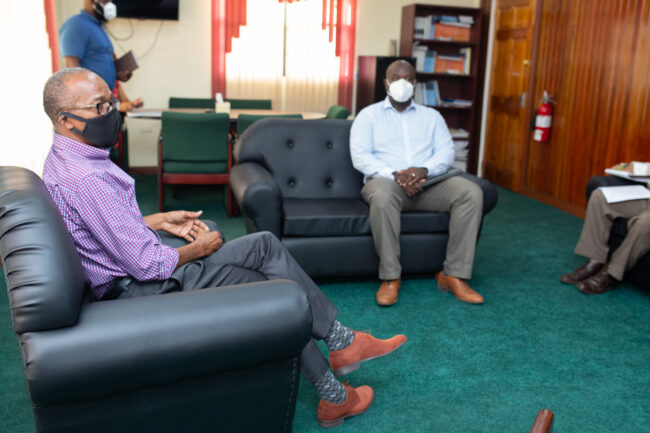 [In the photo, at left] Minister of Labour, Hon. Joseph Hamilton, and the CEO of GTT, Justin Nedd. 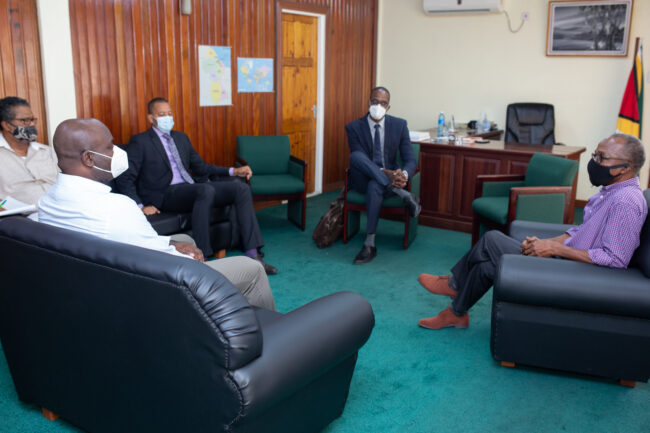 [In the photo, at right] Minister of Labour, Hon. Joseph Hamilton, in discussion with CEO of GTT, Justin Nedd [left], along with Chief Labour Officer, Charles Ogle [second left], and the attorney representing the company.