Staff WriterJune 16, 2017
DPI/GINA, Guyana, Friday, June 16, 2017
The land titling commission of inquiry (COI) seeks to resolve the trickery of the previous administration land titling programme Minister within the Ministry of Communities Dawn Hastings-Williams argued.
The government and the opposition members of parliament today clashed in the House. The two sides differ over a motion brought to the house by the Opposition to revoke the COI surrounding the claims of Amerindians land titling, the individual, joint or communal ownership of land acquired by freed Africans and any other land titling in Guyana. 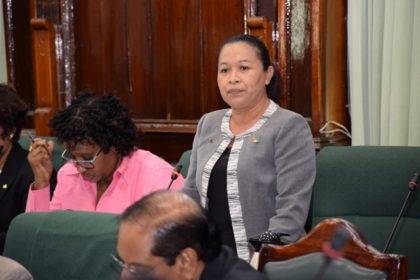 Minister within the Ministry of Communities Dawn Hastings-Williams.

“They later realised that the same land that they were about to give to Amerindian brother and sister were also granted to the miners and that is where the confusion came,” Minister Hastings-Williams argued.
“I think in his (the President’s) wisdom the setting up of the COI is not to take away Amerindian land but is to resolve the same very problem,” Minister Hastings-Williams assured.
The minister further noted that the previous administration had 23 years to address fully the issues of indigenous land and failed. She noted that the government within two year is working towards bring the issue to a successful closure.
“There is enough land to satisfy the needs of the Guyanese people and generations to come but today land is still a source of pain and 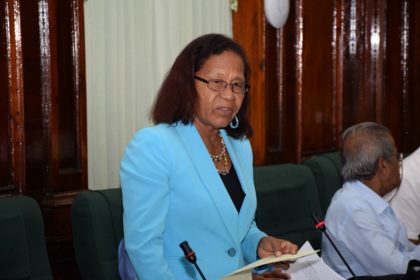 controversy which if not settled will divide us more hindering our development and growth as a nation,” Minister Hastings- Williams said.

The motion being moved by the Opposition in the house seek to block the President’s move to set up a six man COI to examine and make recommendations to resolve issues surrounding Amerindian and African land issues in Guyana.
Meanwhile, prior to Minister Hastings-Williams taking the floor Opposition Member of Parliament Yvonne Pearson lauded the previous administration’s land titling programme and called for an updated on the programme which was funded through the Norway Fund.
“We need clarification what happened to the fund, is it being transferred to the COI,” Pearson questioned.
In April Minister of Indigenous People’s Affairs Sydney Allicock had told the Government Information Agency (GINA) that the land titling project was granted an extension after the demarcation exercise under the Guyana REDD+ Investment Fund (GRIF) came to an end in 2016.
The government has budgeted for the titling of 30 more indigenous communities in the 2017 national budget. Several of these communities have already received their titles.
By: Macalia Santos and Tiffny Rhodius