Leguan has the shape of a gull’s wing with a size of about 29 square kilometres and a population of about 3,000 residents. This island is one of the northern islands in the delta of the Essequibo River. The other islands are Wakenaam and further north, off the Essequibo Coast is Tiger Island.

When the first Dutch settlers reached the island in the early 18th century, they found “tons” of iguanas in the trees. Yes, the island got its name after the iguana, Leguan Island. The iguana is still hunted to this day; delicious meat, especially the female ones with their eggs. Anyone, anytime, can go and hunt iguanas and it is the fear of many that a day will come when iguana will be extinct from the island, leaving just its name as memory.

As mentioned above, the first settlers arrived in the 18th century from the Netherlands and were later followed by other settlers from France, England, British West Indies and Belgium; they cut the trees and planted indigo, oranges, cocoa and other fruits, but also vegetables and in the later years’ sugar cane. Slaves were bought and shipped to Leguan, primarily to dig trenches and build sea walls. Also, to plant and reap sugar cane. Today, the island is dominated with rice farming, cash crop farming and rearing of cattle as economic activities. 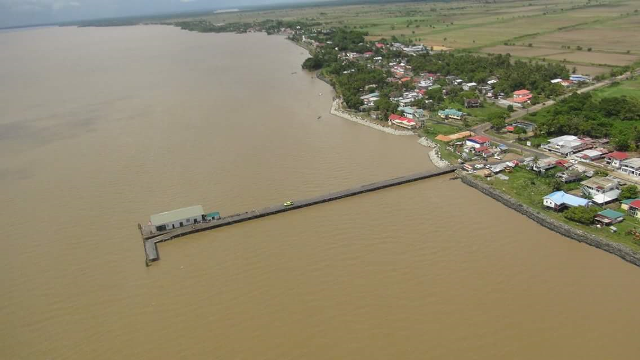 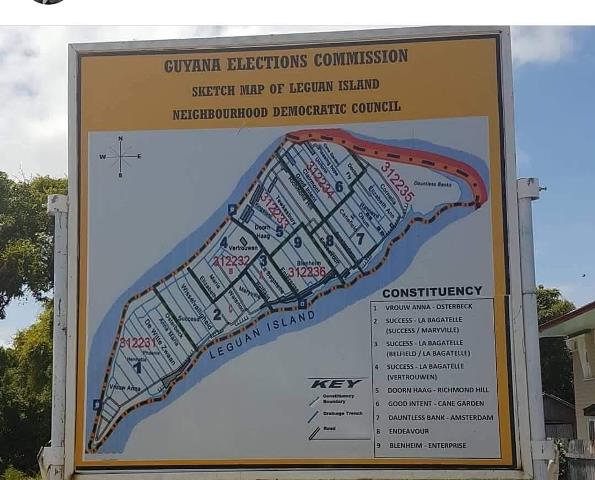 In 1994, the rice was threshed by hands because the government-owned combine (and a private one) broke and subsequently became operable. The last pieces of the government-owned combine are still to be found today on the roadside. It is much different now for almost every rice farmer now has their own equipment and several combines are on the island making work much easier.

The island has six rice mills/factories, five primary schools and one secondary school. The building of the Leguan NDC office in Enterprise is one of the oldest buildings on the island, a bit antiquated.

Many churches, mandirs and mosques are found on the Island with the Saint Peter’s Anglican Church (1855) being the most famous. It is in Enterprise, only a short distance away from the Leguan Stelling. The foundation stone for the church was laid by Lieutenant Governor Walker on August 1, 1853, and two years later, on St Peter’s Day, July 29, 1855, His Lordship, Bishop William Piercy Austin consecrated the church in the presence of the Governor, P. E. Wodehouse and other prominent individuals.

The St Peter’s Church and the separately standing, leaning bell tower are regarded as the finest brick structures constructed in Guyana in this time. The church, with its tiled sanctuary, asphalted floor, architectural rafters and stained windows, is now under renovation. It is expected that the church will be opened to the public, at the end of this year.

Another remarkable site on the island is the 52 foot (15.8 m) high Lord Hanuman statue (Murti). The Murti, located on the site of the Rama Krishna Mandir in Blenheim, was consecrated on November 6, 2016, by Pandit Sunil Sharma. Present were the then Minister of Social Cohesion, Amna Ally and Minister within the Ministry of Public Infrastructure, Annette Ferguson.

When Henry Bolingbroke, Esq, Deputy Vendue Master at Suriname visited the island of Leguan in 1809 he wrote, “The appearance of the island is truly pleasing from the water, a sandy beach ensures a good landing, the roads are finely shaded with orange and cocoa-nut trees, and indeed, the whole being so beautifully laid out, has the appearance of a gentleman’s pleasure ground.”

On the western shore of Leguan, there were some beautiful beaches; most of which have disappeared naturally, others through the break-up of groynes in the 1970s. Today, there are only four beaches: the High Sand Beach near the village of Uniform on the North-Western shore of the island, the Dauntless Beach near Canefield on the North Eastern shore, and small beaches in Waterloo and Phoenix which appears only at low tide.

The Dauntless Beach is arguably the best and has its own history, which many Guyanese don’t know until today. Vincent Roth wrote in his book ‘A Trip on the Baridi’ (1907): “… Many years ago, a sloop named Dauntless ran on a mudflat at low tide off Leguan, and, as she could not be floated again, she was abandoned… This grew rapidly as more mud was deposited by the tides, until … it joined on to the neighbouring island of Leguan…”

As is it now, Leguan has 100 per cent asphaltic road, a functioning Cottage Hospital, a plantain chip factory, a modernized guest house, police station, post office and a Regional Sub-Office. It is also home to the longest wooden stelling, in Guyana, which will undergo repair works soonest.

The most renowned politician that was born and bred on the island is the late Winston Shripal Murray who once served our country as Deputy Prime Minister. In memory of Murray, yearly softball cricket competitions are held because he was a lover of cricket.

Travelling to Leguan is strictly by boat. Lady Sandaka is the big boat that transports vehicles and people on and off the island and a number of speedboats also ply the mighty Essequibo River at a cost of $500. Leguan is a true country beauty with very many hospitable people. The menfolk find comfort during their leisure time in the many rum shops while the ladies enjoy the fire-side preparing hot fresh meals. Dhol and Rice with Chicken Curry and Cook-Up are the most popular dishes on the island.

Leguan is a place to visit for lovers of historic sites and lovely country life. Words do no justice to this paradise, visits will.