(GEORGETOWN– March 28, 2017)- Some 170 residents from Regions One (Barima/Waini) and Three (Essequibo Islands/West Demerara) over the weekend benefited from a medical outreach organised by SOLO Eyewear, Da Silva’s Optical in collaboration with the Ministry of Public Health (MOPH). 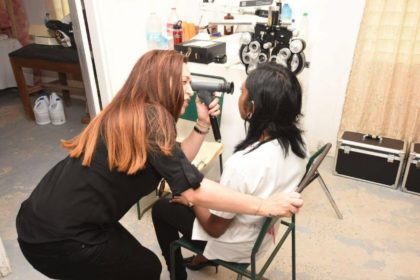 Residents as young as 10 and as old as 85 took advantage of the medical services in their respective areas. The medical outreach was funded by SOLO Eyewear and the Young Leaders of Americas Initiative (YLAI).

“Photophobia is discomfort or pain to the eyes due to sunlight, while presbyopia is a condition associated with the aging eye that results in progressively worsening ability to focus clearly on close objects”, said Dr Shannon Da Silva, Co-Owner & Optometrist at Da Silva’s Optical, South Road.

Da Silva noted that “through missions like these, we strive to encourage persons to learn more about their eyes. We encourage early and

Guyanese Innovation; a pair of spectacle being wore by resident of Mabaruma

regular screening, since this helps to catch any form of eye diseases and disorder in its early stages, hence making treatment more successful and in some cases, inexpensive.”

Amaraneni explained that the eye care mission to Guyana came about through a reserve exchange project between herself and Anthony through the YLAI.

She pointed out that SOLO Eyewear was able to improve some 13,000 vision of people in need, in 32 countries.  “They were laughing and smiling as soon as they put their glasses on. With their newly restored vision, these individuals are much better able to live fuller, more productive lives”, Amaraneni said on the final day of the outreach.

Zalene Fernandes, a mother of nine and a resident of Mabaruma Hill was ecstatic after undergoing tests and having her vision improved. 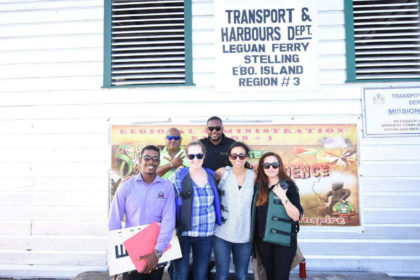 “I am a cleaner at the Nursery School and my husband is a pensioner. I have been trying to save some money to go to town to do my spectacle since last year but I wasn’t getting the finances,” a greatful Fernandes said.

“From time to time, such services brings tremendous relief to the residents,” Shaw said.

The Regional Health Officers from both Regions praised the team for volunteering their time, helping the Public Health Sector and preventing deteriorating vision of the beneficiaries.

SOLO Eyewear is a US-based company that creates environmental friendly sunglasses where funding from sales is used to help underwrite initiatives like those done in Leguan and Mabaruma.