Residents of several communities within the Mabaruma District, Region One will benefit from about $8M worth in capital equipment. The equipment was handed over by Minister within the Ministry of Indigenous Peoples’ Affairs Valerie Garrido -Lowe and Permanent Secretary to the Ministry, Alfred King during a recent visit to the Region. 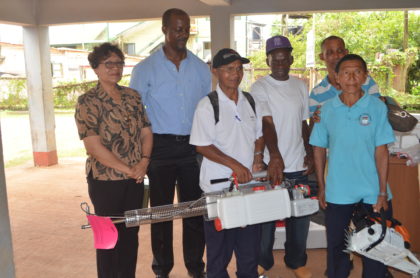 Minister within the Ministry of Indigenous Peoples’ Affairs Valerie Garrido-Lowe (left) with Permanent Secretary to the Ministry, Alfred King, along with some of the residents who received equipment

Minister Garrido-Lowe reminded the residents that the equipment given to them was not done out of favour, but because they needed them. The Minister explained, “What governments do, is try to ensure that everybody benefits according to priority especially if they are a good government, not who is their friend and so on, but who really needs it will get it when they need it.”

The Minister pointed out that the government has over the years spent millions of dollars in equipment in indigenous communities, and urged them to take good care of them. The Minister said that the equipment is there to serve the community and the proper care of them should be everyone’s business.

“Every dollar counts in business, and you have to start running your projects as businesses. This is yours, it is an investment, it’s your capital and you have to make sure that it works for you over the years,” Minister Garrido-Lowe urged.

Permanent Secretary King said that he was happy to be able to deliver on requests made by the various communities. King noted that all capital projects for 2017 have already been sent to the National Tender Board. He added that very soon the Ministry will be returning to hand over the 2017 capital equipment to the residents of the communities. 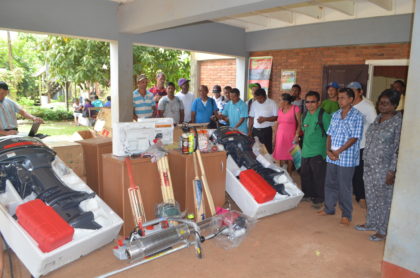 King pointed out that out of the $64M allocated for development in Region One, over $30M is allotted for communities in Mabaruma. The Permanent Secretary told residents that the Ministry will continue to partner with the residents which will afford them better delivery of services such as potable water, health services, and education among others.