Mahdia internal roads’ rehab on track -for completion by August 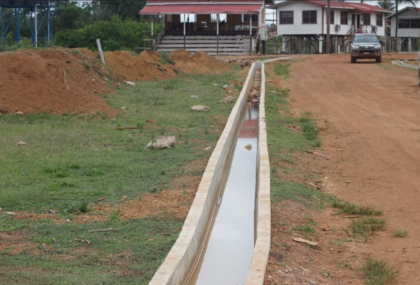 Some of the drainage works undertaken in the Mahdia community

The rehabilitation of the internal roads in Mahdia, Region Eight, is now on track after substantial delays due to encumbrances.

Hinterland Engineer, Ministry of Public Infrastructure, Jeffrey Walcott told the Government Information Agency (GINA), that the completion of those works was delayed due to difficulties in relocating utilities and residents having buildings in the path of the  works.

However, the relevant authorities have been engaged and work is now progressing, Walcott explained. “The actual ‘township’ had some issues regarding the proposed the limit of the alignment versus where the residents’ properties are, so there are some small issues with persons encumbering on the proposed alignment. Those issues are being addressed at this point. We have been engaging MPI (Ministry of Public Infrastructure) and GWI (Guyana Water Incorporated), to collaborate on a much greater extent to relocate the utilities… the region has been engaging the residents to understand where the boundaries lie,” Walcott explained. 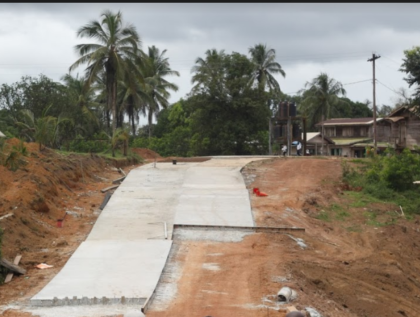 Approximately $720M was allotted in the 2016 National Budget for works on the Mahdia roads. The funds have been rolled over for completion of the project in 2017.  The Senior Hinterland Engineer explained to GINA that the residents of Mahdia are understanding, and have agreed to remove their buildings for the rehabilitation process to take place.

He pointed out that Mahdia like many other mining communities did not develop in a systematic way, “so as the ‘town’ grew, persons put up things in an ad-hoc manner so definitive boundaries are there, but because persons are not monitored, we do have some cases where persons would have gone beyond their boundaries.”

There will also be two kilometers of the roads concreted, along with several drains. The works are slated to be completed in August 2017.

In 2016, Minister of Natural Resources, Raphael Trotman visited the mining community, and heard the calls of the residents for their roads to be rehabilitated.