For the first time, the village of Massara in Region 9 has access to potable water, and internet access; and residents of the North Rupununi community have lauded the government’s effort to improve their lives over the past four years.

The villagers were in high spirits on Saturday during a visit by Minister of State, Hon. Dawn Hastings-Williams, who acknowledged the newly installed internet connection and water distribution system. During the interactive session at the village Benab, the residents thanked the government for these newly added features to their community. 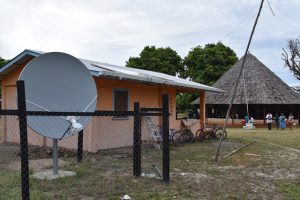 The internet connection at the Massara Village office 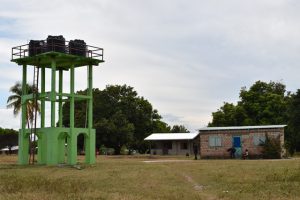 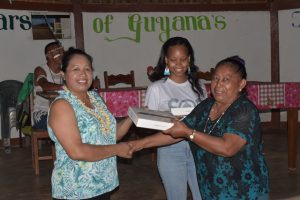 Minister of State, Hon. Dawn Hastings-Williams handing over a tablet to Mary Edwards on behalf of her grand daughter 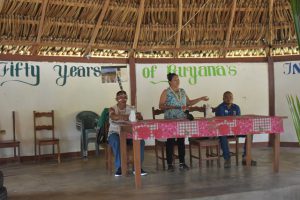 One resident, Mary Edwards, a retired teacher said that contrary to naysayers, Massara has never seen such level of development since it was established decades ago. She explained that for the first time the residents of Section Two are receiving water directly to their homes.  “… now that the Guyana Water Incorporated has installed the PVC pipes for us and we are receiving water.”

Additionally, to ensure the village has a sufficient water supply during the dry season, the government through the Ministry of Agriculture constructed three water catchment areas.

Edwards said that the Massara Women’s Group also received $1.3 Million for its sewing programme. Several women were employed and are sewing uniforms for school children. The village recreational ground was also upgraded. The village also received funding to assist youths to re-sit Mathematics and English Language at the Caribbean Secondary Education Certificate (CSEC) examination. Also, thanks to the internet connection Edwards happily said she can now pursue her University of Guyana education, online.

Among other interventions, last year, the village also benefitted hot meal programme where the women receive $500,000 per month to provide meals for the students. The road leading into the village was also upgraded.

Through the Ministry of Indigenous Peoples’ Affairs, the village youths were trained under the Hinterland Employment and Youth Service (HEYS) programme and today, a number of them are operating their own business. They also received funding under the Presidential Grant programme. The cricket and football clubs also received support in the form of uniforms and other sports gears.

According to Minister Hastings-Williams, the David Granger-led administration is keen on ensuring the hinterland benefits from the same service as those on the coastland. The aim, she added, is to ensure communities have proper infrastructure and systems that make it possible for villagers to solve their own problems and respond to their needs through proper planning, action, and support.

While expressing her pride in being able to connect to the internet from Massara, the State Minister said that the government is on a mission to ensure all citizens regardless of where they live, have access to information. To date, the government has established over 100 ICT hubs across the hinterland.

According to the Minister, while the government would have liked to do more at the community level, development is a process and it takes time. However, with the funds that will accrue from the oil and gas sector, more resources will be pumped into the hinterland. To this end, she urged the villagers to begin planning and preparing their young people to fully benefit from the opportunities that will ensue.

“Guyana is moving on the right path. As a government, we have committed that these resources from the oil and gas sector will benefit every Guyanese regardless of where they live… You must be prepared, identify your youths who are interested and make use of those opportunities for training… Get involved. Become a participant so that you can benefit”

Minister Hastings-Williams handed over 10 tablets to students who would have excelled at their National Grade Sis Examination compliments of the Ministry of Public Telecommunications. The village also received a brush cutter and rake, tyres for the village bus following a request.