Conservation International Guyana, is leading a civil society gold mining initiative to shift towards mercury free practices by 2025. The project was launched on Tuesday evening at the Pegasus Hotel, Georgetown.

Vice President of Conservation International Guyana, Dr David Singh, explained that the project aims to fill the growing need to build an integrated approach through which the gold mining sector can participate more effectively in the green economy. 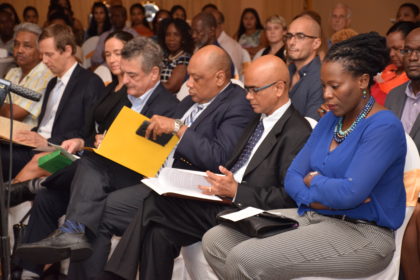 The project which is called “A supply chain approach to eliminating mercury in Guyana’s Artisanal and Small Scale Gold Miners (ASGM) sector: El Dorado Gold Jewellery- Made in Guyana” is being funded by the Global Environment Facility’s (GEF) under the Global Opportunities for Long-term Development in ASGM.

The US$3M four year project is expected to produce a well-designed intervention which by 2020, will see mining operations in at least one geographical region in Guyana introduce into the market, gold products that are shown to have met key environmental and social safeguards, demonstrate improved significantly higher recovery rates and close to zero mercury use in its processing, Dr Singh explained.

This will be developed through the creation of policies and market incentives. The ASGM will also be connected to supply chains and markets which use less or no mercury in the extraction of gold. Efforts would also be placed on developing downstream El Dorado-branded jewellery.

Minister of Natural Resources, Raphael Trotman, lauded the project for its integrated approach to address the critical issues that will guide the achievement of Guyana’s green economic vision.  “This project we believe captures and addresses the essence of the many issues that we seek to manage in an extractive industry sector that is bracketed within a green and sustainable development agenda,” Trotman noted.

There are approximately 3,000 enterprises producing gold, 70 per cent of which are small miners’ production with the remainder being

medium scale miners and two large producers. “Sustainability of practice and benefits from this industry are critical not just for those working directly in the sector but the country at large,” Minister Trotman said.

Meanwhile, Director of the Department of Environment, Ndibi Schwiers, said that the project is timely and fits well with the green state agenda being pursued by the government.  “I’m very sanguine of the success of this project not only in achieving its intended outcome but also to bringing us one step closer to honouring our international obligations and Guyana becoming a prosperous green state,” Schiwers said.

Guyana is the first of eight countries to implement the GEF funded project towards mercury-free practices.  The other countries are Colombia, Peru, Kenya, Philippines, Indonesia and Mongolia.