Minister of Business, Dominic Gaskin, said there seems to be a “concerted effort” to derail progress in the oil and gas industry which can transform the country.

The Minister made this point at the opening of the Private Sector Commission’s (PSC) oil and gas seminar which was held on Tuesday at Duke Lodge, Kingston, Georgetown. He addressed recent critics of the Production Sharing Agreement (PSA) which was signed between the government and ExxonMobil. 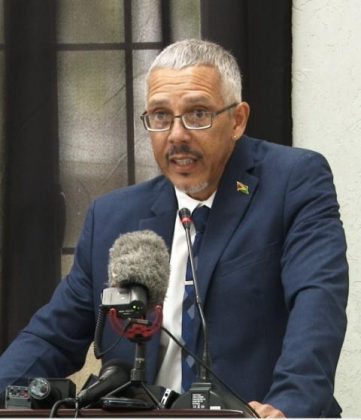 “There seems to be a concerted effort to derail the progress of an industry that can bring about a much-needed transformation of our economy. And the information being shared with the public is very selective and misleading”, he stated.

Minister Gaskin referenced the comparisons being drawn by critics over the royalty Guyana is receiving. “Those who are comparing Guyana’s two percent royalty to Ghana’s 10 percent royalty know very well that they are looking at two different types of agreement, and are not painting the complete picture,” he said.

The 1999 PSA was modified in 2016, following agreement, by both parties. The contract makes provision for Guyana to receive in the first year of oil production, two percent of the gross value and 50 percent of profit oil. Exxon’s agreement with Ghana is a royalty and taxation model.

Minister Gaskin disputed critics claims that the contract is ‘chicken feed’. “In the first year of oil production, the Government of Guyana will earn about the same that it has earned from the last eight years of gold production. That can’t be chicken feed”, Minister Gaskin explained.

The Minister noted that the government has collected just over US$300M in royalties and taxes from gold produced over the last eight years. In fact, the government will earn around US$700M under the existing oil contract Minister Gaskin pointed out. “By 2022 when the second phase of development starts to produce oil, government revenues will increase to approximately US$800M per year. So, for anyone to assert that our government is selling out and giving away our oil, is just plain nonsense”, he added.

Minister Gaskin noted Guyanese must be realistic as the country is a newcomer to the industry and will need help in deep-water oil exploration and production.

“I believe this is a decent deal and I say this not just as a government Minister but as a proud Guyanese citizen. I will not stand here and try to sell you something that I myself don’t buy”, Minister Gaskin told private sector representatives.

Chairman of the PSC, Eddie Boyle, said the seminar seeks to address issues that were not raised at the Guyana International Petroleum Business Summit and Exhibition (GIPEX) which was held in February.