Minister of Social Protection, Amna Ally made good on her promise to residents of Parishara in Region Nine, Upper Takatu Upper Essequibo by handing over several items, they sought from her Ministry.

Garden tools including a grass cutter and a power saw, along with footwear and bags of rice were handed over to several families during a community meeting with the residents on Saturday, February 16, 2019 at the Parishara Community Centre, Region Nine.

Minister Ally reminded the residents that this service to the community represents government’s committment to continuously support hinterland communities, as it aims to bridge the gap between the coastland and hinterland.

“We believe that every Guyanese, regardless of race, colour or creed must be treated equally. We believe we must empower our people, so that we don’t have to give you little handouts, but rather the opportunity to do things and develop yourselves, village, region and ultimately country. So when a group wrote to me and ask for these things items, though they did not arrive immediately, we delivered them. The solar dryers the women requested was ordered and will arrive in the next two weeks,” Minister Ally explained. 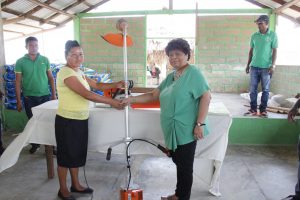 Minister of Social Protection, Amna Ally hands a grass cutter to one of the women from the women’s group 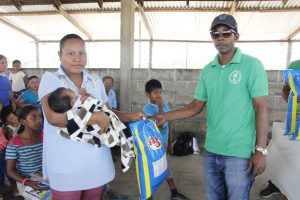 A young mother receives a bag of rice for her family 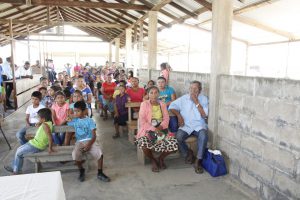 A section of the gathering at the meeting in Parishara

Minister Ally used the opportunity to outline some of the achievements in the community. The Social Protection Minister noted that the establishment of radio stations at Lethem, Aishalton and Annai, played a crucial role in informing and keeping the community update of the government’s affairs and developments in the country.

This, she added is a first for the community and falls in line with government’s aim of being transparent.

Other achievements highlighted by Minister Ally include land allocation for the National Toshao Council, progress with land demarcation, launch of Indigenous languages and upgraded infrastructure.

“Your land titling must seem to be taking long but we want to do it the right way so that what is yours would remain yours. As for the Indigenous languages, the government recognised the importance of the various languages of the Indigenous people and we are working to promote them. In my Ministry we also advertise using the various Indigenous languages. More roads, bridges, lighting facilities and a lot of infrastructure work as well as other developments will be done in this region,” Minister Ally underlined.

Following Minister Ally’s presentation, some of the residents raised their concerns about lack of adequate access to potable water, urgent need for transportation to transport students from the community to Nappi and to transport their produce from the farm and upgrades to the school’s facilities and health centre.

Minister Ally addressed those falling under her Ministry’s purview and assured the residents that those relating to other Ministries will be shared with the respective ministers.

The Minister commended the women’s group for its famous peanut butter and pledged her support in other projects.