Residents of Sophia, Georgetown, today aired their concerns on issues affecting them due to the incomplete Dennis Street. Minister within the Ministry of Public Infrastructure, Annette Ferguson visited the community with a team of engineers, and the residents took the opportunity to inform her of how the incomplete project is affecting their lives.

The street, according to the residents poses a threat them in the form of dust pollution. This has prompted the residents to block the street from vehicular traffic. 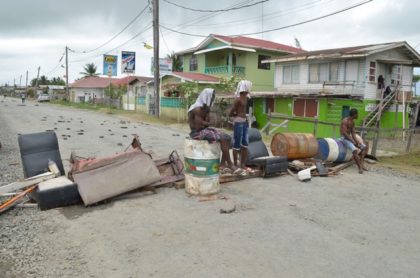 Minister Ferguson after listening to the residents’ concerns explained that the Ministry of Public Infrastructure has begun work on the road from the Eastern Highway, in an effort to improve infrastructural development in the community.

However, it was discovered “that the foundation (of  Dennis Street) has some challenges so the contractor don’t want to do the overlay then in the long -run then you’ll hear that the government isn’t doing a good job. Nevertheless, I’m here this morning to meet with you the aggrieved residents to at least come up with immediate relief,” the Minister said.

The ministry today, stated that Dennis Street will be completed by July 27.

Christine Bovell, a resident said, “our problem is the dust. We spoke with Minister (David) Patterson on Sunday. He said that he will send a water truck to wet back the road, the water truck came here Sunday afternoon, they do a kind of a job, we accept that, yesterday we were looking out for them and there was nobody, the dust is here again, the vehicles don’t have no sympathy for us.” 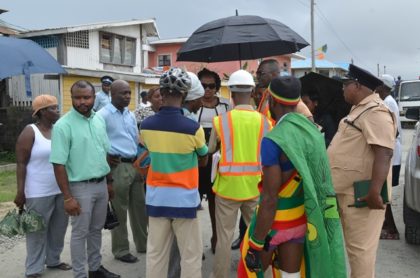 (Centre) Minister within the Ministry of Public Infrastructure, Annette Ferguson listening to the concerns of Sophia residents

Timothy Marks another resident said, “The only problem I have now is with the dust, it is really affecting us, plenty young ones deh in the hospital from choking from the dust. That is how serious it is here.”

Meanwhile, the Minister detailed measures in place to bring relief to the affected residents. “The truck is on the ground, the road will start wetting, and this will be done on a 24-hour basis in order for us to bring some sort of immediate relief to you and have the dust under control.”

Additionally, a team from the Ministry immediately soaked the road to alleviate the effects of the dust. The Minister apologised to the residents for the discomfort they are facing. She urged them to continue to be patient as the Ministry works towards bringing complete relief to them.

Dennis Street was initially scheduled to be completed in mid-May, following the construction of approximately 300 metres of timber revetment.