Georgetown, Guyana – (October 31, 2017) Minister of State, Mr. Joseph Harmon, who holds responsibility for the Department of Environment (DOE) under whose purview the Environmental Protection Agency (EPA) falls, yesterday, called on the agency to place greater focus on concrete research to guide environmental management in new and developing sectors such as oil and gas, towards the generation of technically defensible position. 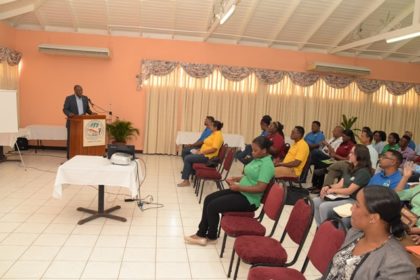 Minister of State, Mr. Joseph Harmon addressing the staff and Managers of the EPA at their retreat yesterday.

The Minister said that emphasis should also be placed on technical expertise and environmental management as he noted that mechanisms to promote the implementation of low impact methods, technology and infrastructure and to address or monitor transboundary movement of pollutants are necessary. The Minister was at the time delivering the feature address at the EPA’s one day Staff Retreat and Capacity Building Workshop at the Mainstay Resort.

“Some of the positions taken by Government are challenged by some local experts and they are also challenged internationally. So you will find them challenging the technical competence of the EPA in the decisions that they make so that when you make a determination, we have to be satisfied that the technical basis of that determination is sound and that we can defend it anywhere in the world. That is why it is very important that we develop technically defensible positions in what we do. Also, your plans should not only be geared toward execution but also to the development of mechanisms to strengthen and enabling framework for execution,” he said.

Minister Harmon noted that through this process, ideas for policy, legislative, institutional and procedural reforms should be generated and not only for the EPA but also for the related sectors. “What I am saying is that the processes and the policies, which you generate must not only be seen as regulating internally, the EPA mechanisms, but the other sectors that are required to do things, which impact on the environment must also determine the way they act. So it is important for you to have very clear, very strong polices, which are defensible and is defensible because it is technically sound and we have competent people who are actually doing that,” he said.

The Minister said that since the establishment of the EPA, it has been one of the key agencies responsible for managing and safeguarding Guyana’s environment and biodiversity. The agency along with the Wildlife Conservation and Management Commission, the National Parks Commission and the Protected Areas Commission, are all positioned within the DOE, as the gatekeepers of the environment and it must, therefore, take that role seriously.

He noted that as an agency under the DOE, the EPA’s role is central to guiding Government, private sector and civil society towards striking a balance between the exploitation of the nation’s natural resources and environmental stewardship, thus the execution of the functions of the agency to ensure conservation protection and sustainable use of Guyana’s natural resources and the established, managed and enforced environmental regulations are key elements in pursuing sustainable development and securing the nation’s patrimony.

In this regard, he commended the agency for its recent restructuring programme, where the organisational structure has been amended to target and address through separate programme areas, all aspects of environmental management. It is part of strategic planning, he said, which is needed to take the agency forward.  “I see and have been informed that these will include waste management, ecological and human health risk assessment, lands and terrestrial resource management, environmental analysis service, air quality management, water quality resource management, biological, coastal and marine resource management, and environmental communication and education and awareness. This restructuring was needed and was very timely and by this, you have established the framework for the development of a strategic plan for the agency, which I see as the main focus of your retreat. Your strategic plan must be one, which generates targets, clear timelines and annual work plans that guide the implementation of work within the EPA,” he said.

Minister Harmon noted that the EPA is, therefore, an important, not only in safeguarding the nation’s resources, but it is imperative to that success of Guyana’s progression towards becoming a ‘green state’.

Meanwhile, Ms. Ndibi Schwiers, Head of the DOE, in her brief remarks, said that planning strategically, which is necessary for the effective functioning of the EPA cannot be seen as a stand-alone target. She noted that in order for the Agency to achieve its objectives, it also requires the staff to get into the habit of ‘visioning’ so that the issues, which fall under its purview, can be adequately addressed.

“This Retreat comes at a time when President David Granger has stated that Guyana will become a ‘green’ state, at a time when the Ministry of Health has reported 200 new cases of cancer for this year, at a time when the mining sector is on track of reaching its target, at a time when major infrastructural works are planned and ongoing, when more housing schemes are being built and at a time when the oil and gas sector is emerging. The environment is a common theme in all of the above. As the principal environmental agency in the country, the EPA has to position itself to be on the frontline of development for the maximisation of benefits at the minimisation of risks to economic development and the EPA has to formulate up to date plans and policies based on knowledge to protect and improve the wellbeing of all Guyanese,” she said.

Dr. Patrick Williams, Chairman of the Board of the EPA, in his remarks, said that it is his hope that the Agency will now recognise that it cannot be business as usual and the EPA must not adapt and change it approaches.

“We have a responsibility to current and future generations and we must be able to bequeath to our future generations, not just things that make them happy but which can improve their lives and livelihoods. The EPA has that responsibility. While helping to management of the environment it has a role to play in the development of Guyana and we must be able to see the development in that manner… We have committed ourselves as Board to be able to change the organisation to meet the needs of the society,” he said. 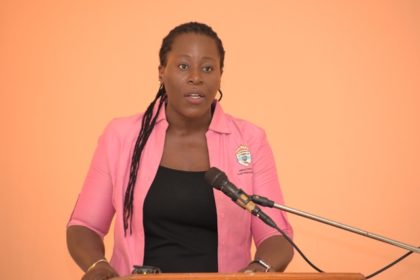 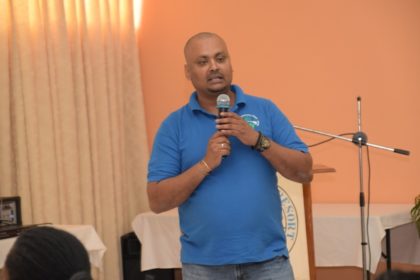 Acting Executive Director of the EPA, Mr. Khemraj Parsram, making a presentation to the group. 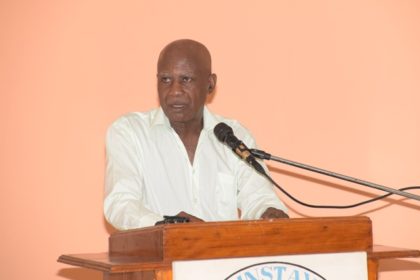 Dr. Patrick Williams, Chairman of the Board of EPA 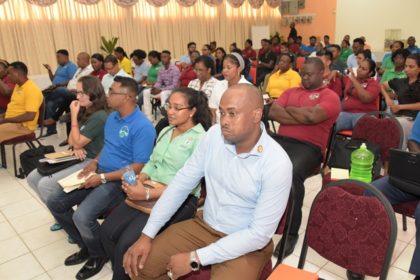