Georgetown, Guyana, May 10, 2017 – During an outreach to Mainstay, Region Two, Minister within the Ministry of Communities, Dawn Hastings-Williams promised residents that a dormitory will be constructed to accommodate teachers from the coast.

The Minister was responding to concerns raised by several residents during a meeting on Sunday in the Amerindian community.

She was accompanied by Toshao of Mainstay, Joel Fredericks, and officials from the Guyana Water Inc. (GWI). 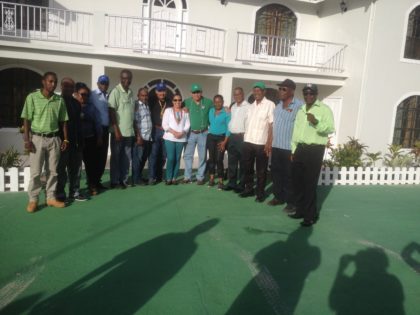 Minister Hastings-Williams noted that arrangements will be made through the regional administration to ensure that the living conditions of government employees who are posted to the region are adequate.

“If there is a need for teacher’s quarters then we will build one,” Minister Hastings-Williams assured the residents.

Several residents who attended the meeting complained that the quarters currently occupied by teachers are in an atrocious condition.

One representative of the Parent-Teachers Association (PTA) described the current living arrangement for teachers as “unfit for human habitation”.

“A head teacher, who is a coast-lander has been appointed to the region and so there is an urgent need for living quarters,” one teacher pointed out.

The head-teacher was expected to take up her appointment as of May 8.

Political activist, Mary Williams explained that Mainstay has never had a teacher’s quarters but she had given permission to the village council many years ago to occupy a building which was used to house teachers sent to the community.

However, due to a lack of the necessary maintenance, the building fell into a state of disrepair and is now in a deplorable condition.

Another resident, Minerva Carter, made a request for a separate space for the nursery school which is currently being housed in the building at the primary school. 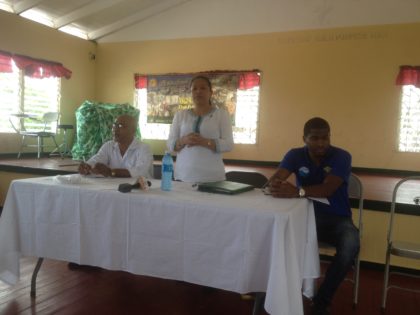 application for firearm licences made by residents after complaints from farmers about wild animals destroying their crops.

Luciana Williams, a teacher by profession, disclosed that while she does subsistence farming to supplement her income, she has not been able to secure the necessary license for a firearm.

Among the other issues raised were the electricity coverage, the water supply and quality and the state of the roads.

The Minister advised the residents to approach the regional administration to have the road works included in the next budget.

A request was also made of the GWI to flush the lines in order to improve the quality of water and also to have an increase supply to outlying villages such as Redlock.

Minister Hastings-Williams promised to have a standpipe installed at Redlock in an effort to ensure a regular supply of water to residents outside the catchment area.

She urged Toshao Fredericks to engage the residents through public meetings as this is the required by the Amerindian Act.

“Public meetings are really important to inform residents and keep them posted. This is the only way they can truly know what is happening,” the Minister said.

She added that all regional officials including the health, education, executive and administrative officials must meet in order to adequately and accurately plan for the 2018 budget.