The Minister of Natural Resources Hon. Raphael G.C Trotman, at the invitation of the Government of Canada, attended the 4th Annual Mines Ministers Summit hosted by Canada’s Mines Minister – Hon. Amerjeet Sohio on March 4, 2019. The Summit which is part of the annual Prospectors and Developers Association of Canada (PDAC) World’s Premier Mineral Exploration & Mining Convention, saw over 50 Ministers gathered to discuss common mining issues, with special emphasis on “responsible mineral supply chains”. During the visit to Canada, Minister Trotman had bilateral meetings with several Ministers of Canada and other governments, investors and financiers from various countries.

The Minister also attended and made remarks at the Guyana Mining Day and Cocktail Reception.

During his remarks, Minister Trotman highlighted Guyana’s over 150 years of successful mining that has seen several companies benefitting from the extraction of its commercially viable mineral resources present in the country’s greenstone belts, specifically gold, diamonds, and bauxite. He went on to mention that though these are the most desired, the country is not limited to them but has several other mineral resources under exploration; manganese, copper, nickel, zinc, lithium, scandium, other rare earth minerals. 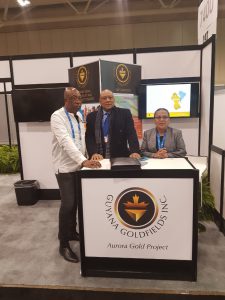 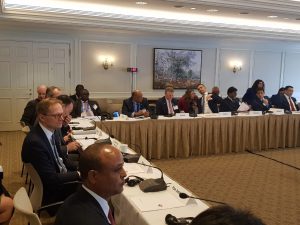 Minister Trotman at the Summit 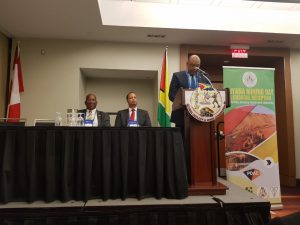 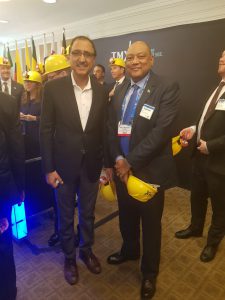 With regards to gold, Minister Trotman made known of current major exploration being done in the country, highlighting companies such as the Guyana Goldfields Inc.’s Aurora project, and Troy Resources Limited’s operations.

He then noted the current manganese resources of 32.4 million of tonnes as indicated by the Guyana Manganese Inc. and other companies involved in bauxite mining such as Bosai Group, RUSAL and First Bauxite Inc.

On this note, the Minister stressed that foreign direct investment in Guyana’s mining sector is actively encouraged as it is critical to the country’s economic development. He said that his ministry; the Ministry of Natural Resources (MNR) has well-established.

operating rules that offer all investors flexibility in establishing the infrastructure and operations necessary to enable their success in their investments. He further said that the MNR policies and regulations are always drafted in consultation with key stakeholders; therefore, offering fair rewards for all stakeholders. At the same time, Minister Trotman stressed that investors must respect the laws of Guyana and take time to understand and adapt to workers’ legitimate expectations and the labour culture.

The Minister also highlighted the role of the Guyana Geology and Mines Commission (GGMC), also present at PDAC, as the premier regulator of mining and the repository of all geological data in Guyana.

The Minister was joined by the Minister of Finance Hon. Winston Jordan, who gave the feature address at the Guyana Day event, and who himself, held high-level meetings with Canadian government ministers and officials.