Minister of Public Infrastructure, David Patterson, recently visited the Moruca Sub-Region to discuss areas of infrastructural development for the community.

On March 1, 2017, Minister Patterson, accompanied by Minister of Indigenous Peoples’ Affairs, Sydney Allicock, met with residents and regional executives in Moruca, Region 1, including the Deputy Regional Executive Officer; the Toshao of Santa Rosa; and members of the Regional Democratic Council.

“I and my administration have a vision when it comes to the hinterlands; we want to see the hinterlands, in the next five to ten years, becoming even more developed and for that to come to pass we need to listen to your concerns,” Minister Patterson told those present.

He further said that the same methods previously employed should not continue simply for the sake of saying work has been done. Instead, he said, a systematic approach is needed. He continued, “Of course, we can’t do everything at once because of certain limitations but we want to ensure that what is done will stand the test of time.”

Minister Patterson also urged the residents and the executives to prioritise projects and indicate these priorities to his ministry. He stressed that, as the persons working and living within the Region, they would have the most insight into what is actually needed.

“We’re in Georgetown and sometimes what we think is best is not always the community’s highest priority. Therefore, that is what we’re here for; to listen to your concerns and decide on the way forward,” he said. He added, “From this visit here we’ll collectively make a decision because this will not work unless we all buy into it.”

Upon the opening of the floor, the key areas of concerns expressed were the rehabilitation of the sub-region’s main bridge; the improvement and expansion of electricity supply; and, to a lesser extent, the state of the airstrip serving the communities.

Residents and regional executives explained that the bridge is in a deplorable state despite its importance as the link between Santa Rosa and other communities such as Paloma. They also raised concerns on the initial design of the bridge and called for the ministry’s intervention in providing a safe alternative.  Ministry officials who were present for the visit subsequently took the opportunity to visit the bridge and Minister Patterson committed to lending the ministry’s support towards the bridge’s rehabilitation. He also assessed the conditions of roads within the sub-region.

Furthermore, following requests for a more regular supply of electricity to the sub-region, Minister Patterson indicated that efforts will be made to extend the supply of electricity from its current 7.5hrs. The hours of operation, he stressed, must be determined by the community and must be based upon their needs.

Minister Patterson and team and Minister Allicock also visited nearby communities to have a first-hand look at other concerns raised during the meeting. 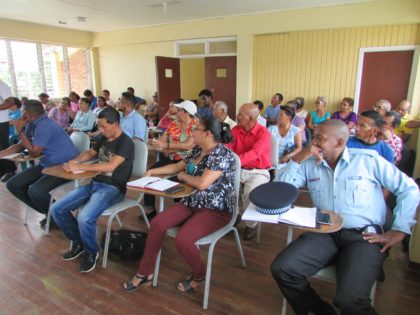 A section of attendees of a recent meeting with Minister of Public Infrastructure, David Patterson, and Minister of Indigenous Peoples’ Affairs, Sydney Allicock in Moruca, Region 1

A section of the main bridge of Moruca, Region 1. The bridge was an area of concern raised by residents and regional executives during a recent meeting with Minister of Public Infrastructure, David Patterson, and Minister of Indigenous Peoples’ Affairs, Sydney Allicock 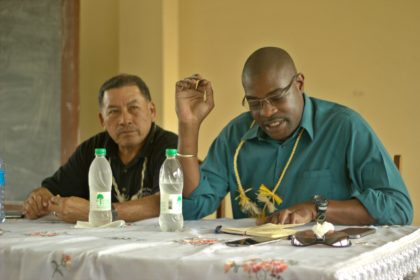 Minister of Public Infrastructure, David Patterson (right) makes a point during a meeting with residents and regional executives of Moruca, Region 1. With him is Minister of Indigenous Peoples’ Affairs, Sydney Allicock 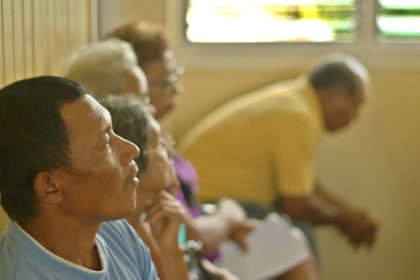 A residents listens closely during a recent meeting with Minister of Public Infrastructure, David Patterson, and Minister of Indigenous Peoples’ Affairs, Sydney Allicock in Moruca, Region 1 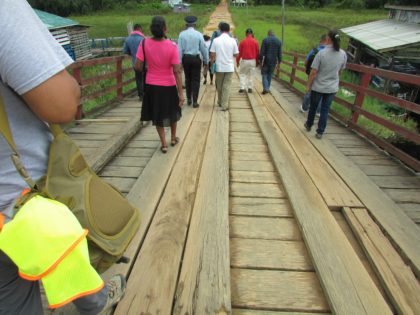 Residents accompanied Minister of Public Infrastructure, David Patterson, and Minister of Indigenous Peoples’ Affairs, Sydney Allicock to a site visit of the bridge in Moruca, Region 1