Mismatch of “Actions and Responsibilities” in Protecting the Planet

Vice President and Minister of Foreign Affairs, the Honourable Carl Greenidge, today said in Brussels that States have a collective responsibility to protect the planet.

“The shared benefits from the actions of individual countries are often not matched by shared responsibility. In fact is too often the owners of the resources who largely or solely bear the opportunity cost of protecting the environment,” he highlighted. 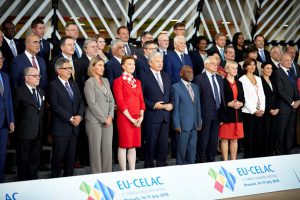 The Foreign Minister noted that Guyana was playing its part. “Countries like my own, enjoying sovereignty over territory with heavy forest cover, an extensive sea coast and an abundance of natural life and biodiversity in both locations, ought to ensure that these resources are properly protected and are used responsibly,” Minister Greenidge said.

This, he explained, could limit the benefit some countries could otherwise enjoy from utilizing their natural resources.

Minister Greenidge also spoke of finance mechanisms that failed to achieve intended targets such as the Monterrey Consensus, noting that “progress that we have made so far on the Addis Ababa Action Agenda on financing for development does not leave us with much reason to hope that the promises made therein will be fulfilled, either”.

The Monterrey Consensus is a global agreement between developed and developing countries, in which both recognized their responsibilities in key areas such as trade, aid, debt relief and institution building. The Addis Ababa Action Agenda is a follow up development financing arrangement.

While the aforementioned mechanisms failed, the Minister shared that Guyana was pleased to see that several European countries met or surpassed the 0.7 percent Gross National Income (GNI) target for financing development.

“We hope that other OECD countries can add to this laudable achievement, especially since many of our countries still need to build capacity if they are to implement sustainable activities,” he urged.

Established in 2011, the regional forum CELAC provides a platform for 33 countries within Latin America and the Caribbean to exchange dialogue and collaborate on political agreements.

The CELAC-EU Ministerial meeting was held under the theme “Building Bridges and Strengthening our Partnership to face Global Challenges.”